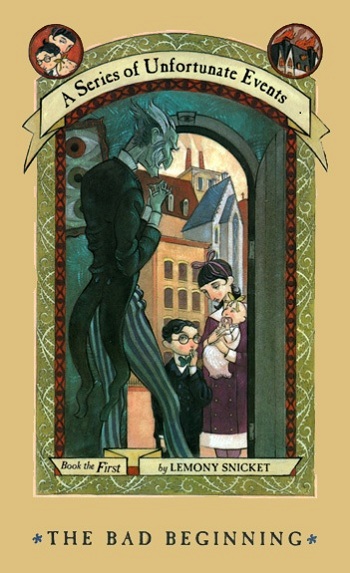 Wouldn't you rather read a story about a happy little elf?

A Series of Unfortunate Events is a series of darkly humorous children's books by Daniel Handler, under the nom de plume Lemony Snicket.

After their parents die in a fire at the family mansion, Violet, Klaus and Sunny Baudelaire are left in the care of Count Olaf, a sinister distant relative who wants his hands on the Baudelaire family fortune, which Violet will inherit when she turns 18.

Throughout the first few books in the series, the children are sent from one caretaker to another, each one more eccentric and troubled than the last. Count Olaf is following them in a series of Paper Thin Disguises that only the children immediately see through. Eventually, the children must strike out on their own to discover their family's dark secret - their parents' connection to a mysterious organization. And all the while, bizarre and improbable disasters strike the children and everyone around them for no discernible reason.

Lemony Snicket narrates throughout, providing commentary, anecdotes, and advice - usually against reading any more of his history of the Baudelaire orphans.

For a guide to the copious amounts of literary/historical allusions present in the books, see here

A four-part prequel series, concerning a young Lemony Snicket joining VFD, has been announced. The first installment will be out October 23rd 2012.

A Series of Unfortunate Events:

A Series of Unfortunate Events is the Trope Namer for:
The following tropes are common to many or all entries in the A Series of Unfortunate Events franchise.
For tropes specific to individual installments, visit their respective work pages.
Retrieved from "https://allthetropes.org/w/index.php?title=A_Series_of_Unfortunate_Events&oldid=1946922"
Categories:
Cookies help us deliver our services. By using our services, you agree to our use of cookies.