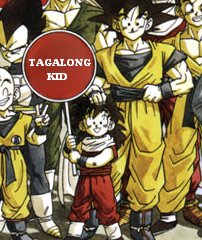 Except he's not as much of a load as he seems.

Typically the youngest member of a Five-Man Band, the Tagalong Kid is usually the Hero's or the Chick's younger brother. He gets to save the day about once per season, but in the worst case scenarios he'll end up being The Load or Designated Victim in every other episode.

If the kid is an actual teammate instead of just a tag-along, the kid might sub in for just about any role but The Hero, with the proper tropes behind him or her.

Not to be confused with a child who's just part of an ethnolinguistic group of people of the Philippines.

Examples of Tagalong Kid include:

Retrieved from "https://allthetropes.org/w/index.php?title=Tagalong_Kid&oldid=1842135"
Categories:
Cookies help us deliver our services. By using our services, you agree to our use of cookies.