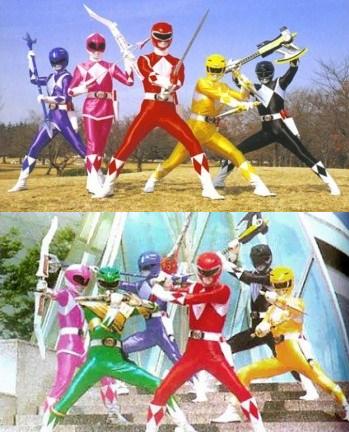 Some series start out with a particular type of Ensembles, with a certain number of characters and a defined role for each: a Power Trio, for example, or a Five-Man Band. Then, mid-season, a mysterious new character appears, fighting the protagonists and antagonists alike! After many misunderstandings, the new character is revealed to be a good guy, and joins the team.

Any new character that joins an established ensemble and knocks it out of one of the traditional categories (and possibly into another) is a Sixth Ranger. There may be more than one per team, with either several joining in succession, or pre-established pairs coming in at once. In a Magical Girl show, it is not uncommon for the Sixth Ranger to be the lead character's boyfriend.

Their power and coolness is inversely proportional to the number of episodes since their début, since Good Is Dumb. Expect them to be single-handedly defeating enemies that the main team struggled against during their first appearance, falling in line as they become integrated into the group, then finally getting overtaken by the original heroes. In fact, they almost invariably tend to become a magnet for The Worf Effect as soon as the latest new Big Bad shows up.

In some of the more extreme cases, a former Big Bad, Dragon, or Wild Card villain can take on this role after they have been defeated or performed an independent Heel Face Turn, and may or may not act as a secondary Lancer.

If the show doesn't look like it's going to change its status quo, expect the Sixth Ranger to actually be the Sixth Ranger Traitor. Since most Sixth Rangers used to be Loners Are Freaks, they may serve as the Token Evil Teammate. If a Sixth Ranger candidate does join the Ensemble, but the series is nearly over, the candidate is an Eleventh-Hour Ranger. When the team started as a Power Trio and gets two Sixth Rangers to make a Five-Man Band, they make Three Plus Two.

Compare Hitchhiker Heroes and Magnetic Hero, where adding characters is the team's normal state. Sailor Earth is a Fan Work subtrope where the Sixth Ranger is an Original Character.

A common method for Merchandise-Driven works to add new characters to the cast—and the toy line.

Examples of Sixth Ranger include:

Retrieved from "https://allthetropes.org/w/index.php?title=Sixth_Ranger&oldid=1946033"
Categories:
Cookies help us deliver our services. By using our services, you agree to our use of cookies.