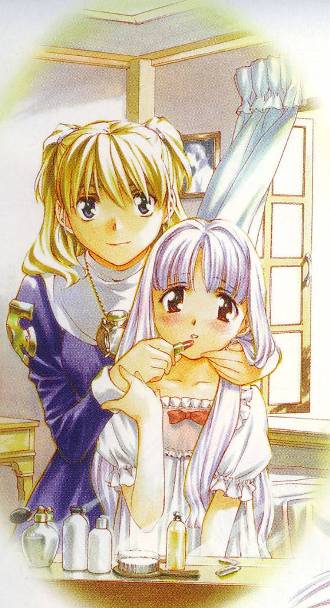 If your show is aimed at a younger audience, this young woman (usually in her mid to late teens, sometimes in her early 20s) will be older than the Shorttank and be the girl everyone thinks is hot (if they're nice) or a slut (if they're not). The Shorttank girls often admire them, even when they playfully flirt with the much younger male lead and steal everyone's attention. Also, the Yamato Nadeshiko or Shrinking Violet girls will admire and at the same time envy how more open their Big Sister figure is with her thoughts and feelings.

This young lady may or may not catch a Shonen series lead's eye; if he hasn't entered puberty yet, she's more likely to be paired up with either The Big Guy, the Team Dad or the Big Brother Mentor. Or maybe, if she's persistent enough, she'll end up in an Odd Couple with an Aloof Big Brother or a single Hot Dad. She may also evolve into a Team Mom thanks to Character Development.

Expect a somewhat jaded, cynical character who prefers to work the system in their favor rather than admit to others she's become cynical. If old enough to drink, she may also be a Bottle Fairy, or even The Ladette; if not, she'll often be a Lethal Chef and/or Big Eater. If older than the standard, she might be a Christmas Cake as well. She's often a Good Bad Girl.

The trope can apply to male characters as a lesser form of the Big Brother Mentor. This type is more commonly applied to a level-headed Non-Action Guy or a Nice Guy whose main job is to be a mediator in a group or take care of the kids.

Compare Onee-Sama, also a sister figure but usually more ladylike, quiet and graceful, and Aloof Big Brother, where the status causes a conflict between the (usually male) siblings.

Examples of Cool Big Sis include:

Retrieved from "https://allthetropes.org/w/index.php?title=Cool_Big_Sis&oldid=1920388"
Categories:
Cookies help us deliver our services. By using our services, you agree to our use of cookies.