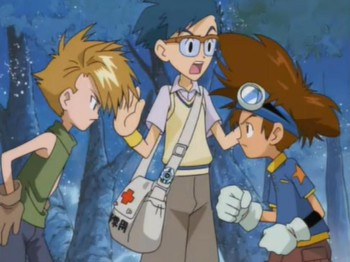 I don't care if he called your hair stupid, it's not okay to hit! You're both grounded!

The opposite number to the Team Mom, more often than not the disciplinarian, lead-by-example-kind of character in contrast to the warm, nurturing tendencies of a Team Mom. The Team Dad is almost always the oldest member of the team and if he isn't the leader, then he's definitely the mentor, and in family-based teams, he is the father (or at least the big brother) of at least one member. He tends to be strict and gruff, but he never hesitates to put his life on the line for his team members. Sometimes the facade might even crack and he'll show undisguised pride over his "kids", particularly if the team members are True Companions.

Like the occasionally non-female Team Mom, Team Dads aren't Always Male, but the rare female ones are almost always the exception.

If a team has a Team Mom and a Team Dad, expect them to either play a Good Cop, Bad Cop routine on the rest of the team or come in conflict over their "parenting" philosophies. Cue "Mom and Dad are fighting" jokes from the "kids" if Team Mom and Team Dad aren't a couple, quickly followed by "It's not like that, we swear" from them (but they're very likely to end up together, anyway).

Compare Papa Wolf, whose children are his Protectorate; while the tropes can overlap, the Team Dad strives to make the "children" (who also tend to be older than the Papa Wolf's, and are less likely to be blood relatives) able to fight and defend themselves. A stern version of The Face, of which this trope is a subtrope.

Compare also A Father to His Men.

Examples of Team Dad include:

Retrieved from "https://allthetropes.org/w/index.php?title=Team_Dad&oldid=1809325"
Categories:
Cookies help us deliver our services. By using our services, you agree to our use of cookies.