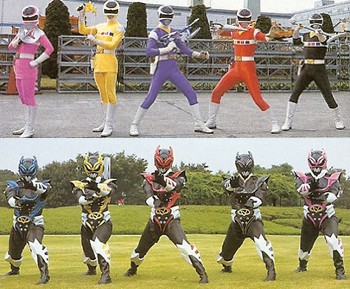 One team is the Trope Namer. The other is the original. Guess which is which?

A regular Legion of Doom has members which oppose the heroes and are often their archrivals, but their powers are scattered all over the place, and they're not necessarily Evil Counterparts even if they have the same number of members.

The Psycho Rangers are the collective Evil Twin of the Five-Man Band. Each one's nature/powers mirror a specific hero and they work together as a group. The same way The Hero can get his True Companions together to fight the Monster of the Week, sometimes The Big Bad, The Rival, Evil Twin, Monster of the Week or Evil Counterpart can get himself a team made up entirely of Evil Counterparts to the main cast. As a result, if the team includes such specific characters as the Big Bad and The Dragon, they may also be a Five-Bad Band.

If they know all the moves of their heroic counterparts, the Psycho Rangers may be too strong for their duplicates one-on-one. The heroes can sometimes turn the tables by switching opponents and fighting each others' evil doubles. Without knowledge of the heroes' fighting techniques, the Psycho Rangers become much easier to defeat. (Unless they promptly switch back again.)

If one of the Evil Counterparts is a gender-flipped version of one of the heroes, you can expect to find some sexual tension between the two.

The most extreme, but not the most common, type of Psycho Rangers are literally evil clones or Mirror Universe counterparts of the heroes.

A Sub-Trope of Five-Bad Band and Quirky Miniboss Squad. May to various extents also be a Similar Squad. Can be part of a Geodesic Cast. Usually turns out to be an Evil Knockoff team. May lead to Counterpart Combat Coordination.

Examples of The Psycho Rangers include:

Retrieved from "https://allthetropes.org/w/index.php?title=The_Psycho_Rangers&oldid=1727904"
Categories:
Cookies help us deliver our services. By using our services, you agree to our use of cookies.