You Are in Command Now 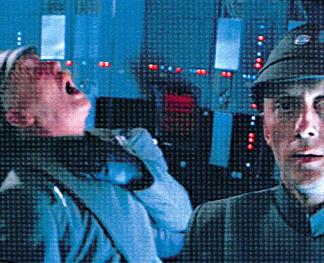 You Are in Command Now, Admiral Piett.

O'Brien: It's an old naval tradition. Whoever's in command of a ship, regardless of rank, is referred to as "captain."
Nog: You mean if I had to take command, I would be called "captain," too?
O'Brien: Cadet, by the time you took command, there'd be nobody left to call you anything.

A character, working in the military, is suddenly forced into duties that by all rights ought to belong to someone of much higher rank; everyone who ought to be doing those duties has unexpectedly found themselves dead, indisposed, or unavailable.

This is most likely to occur in the navy or its Space Operatic equivalent—it requires that the plot be isolated enough from the rest of the military that they can't just respond by immediately sending a replacement of the appropriate rank. Trapped Behind Enemy Lines is another possibility, as is the characters becoming prisoners of war, where under The Laws and Customs of War, the senior-most commands, even if none of them belonged to the same unit prior to capture.

In Real Life, if there are a number of survivors of the same rank, the most senior of them holds command (unless otherwise designated, ie, the XO is always second-in-command and the OPS officer is always third, regardless of rank). In fiction, the situation is often adequately chaotic that the one that actually gives orders may find himself pressed into command and leadership. (In really chaotic situations, it may dawn on him that he is giving orders to superiors—at which point, the highest-ranking superior generally tells everyone to follow their plan. Contrast With Due Respect.)

Often this requires them to press juniors and otherwise unsuitable people into roles as their subordinates. Occasionally, the promotee subsequently becomes Drunk with Power.

Usually the "promotion" involved is strictly temporary. Either the people who are supposed to do the job will return from whatever made them unavailable in the first place, or a replacement will eventually appear. On the other hand, in a continuing series, a stint of You Are in Command Now is not exactly a hindrance to promotion, since it shows Leadership.

Compare Unexpected Successor, Falling Into the Cockpit, Take Up My Sword, Time to Step Up Commander.

If the promotion occurs because the promoted deliberately offed the person occupying the spot in the first place, and this is considered a legitimate situation, then you have a case of Klingon Promotion.

Note that if the character does not command, it falls under Field Promotion, since it is handled out by the commander, even if he would not normally be the commander.

Examples of You Are in Command Now include:

Amy: [Being the commander] is a little dangerous... but... it's not like a major emergency is going to happen anytime soo-- (cue warning klaxons as the Wolkenritter are spotted)

"Who is," Uexkull asked, his voice like a slither of dry scale, "second in command? Say, for instance, if the garrison commander is suddenly deprived of brain activity?"

He put every ounce of command he could into his voice, hoping that whoever was down there would have the sense to respond.

Also, if you manage to down the Yellow Squadron pilots in the right order (something nearly impossible to do, as there is no way of differentiating them), the dialogue continues as the pilots' command structure disintegrates and pilot B gets command, then C...

Tempo: ... further, in consideration of your status as commander of a foreign vessel, I recognise you as military attaché for your mission, with the right to be addressed as captain.
Jardin (thinking): I hadn't until then realised, as last survivor, I was technically Bellarmine's commander.

Zapp: (After steering the ship towards a black hole) Nothing remains now but for the captain to go down with the ship.
Kif: Why, that's surprisingly noble of you sir.
Zapp: No, it's noble of you Kif! As of now, you're in command. (Rips insignia off his arm and sticks it on Kif) Congratulations Captain.
Exits room and is soon seen outside fleeing in an escape pod.

Black Mask: You. You're my new Number One.