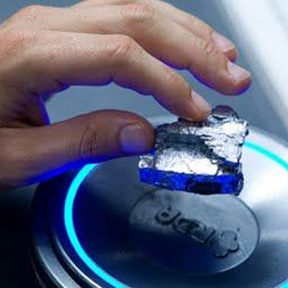 The name turns out to be very meaningful.

Unobtainium is the exotic metal or other material that is needed to make the Applied Phlebotinum work.

Much mad science uses unobtainium, such as imaginary chemicals with impossible properties or super-strong alloys that cannot be made from common earthly metals. Alien spaceships and weapons are usually made from unobtainium as well.

Some forms of unobtainium are based on real physics, but beyond the current scope of human engineering, such as Room temperature superconductors; they would revolutionize just about every form of technology, but they are not in and of themselves dangerous or based on some exotic physics-bending principle.

Others are more fantastic "high-grade" unobtainium, such as Antimatter, which would be a revolutionary way of storing huge amounts of energy, if it didn't violently[1] undergo mutual annihilation with any conventional matter it came into contact with, including the walls of antimatter storage containers.

The most common varieties of unobtainium in fiction sit somewhere in the middle, like materials so resistant to heat and/or damage as to be Nigh Invulnerable compared to other, similar substances. Materials such as Mithril, adamantium and Orichalcum (and all variant spellings thereof) are the fantasy version. Thunderbolt Iron is especially popular in fiction (and has some basis in reality—until blast furnaces were invented it was the best source of refined iron).

Following this would be medical and/or chemical wish-fulfillers; Classical real-world alchemy casually referred to carmot, the base substance of the Philosopher's Stone, and Azoth, either the "universal medicine" or "universal solvent". The ancient Greek writer Plato referred to "orichalcum" (Greek for "mountain bronze") in his description of Atlantis.

Increasingly common in Science Fiction in three flavors: whatever stuff makes Faster-Than-Light Travel possible, closely followed by the stuff that can mess with gravity (if they're not one and the same), and finally the stuff they make Nigh Invulnerable Spaceships and/or Humongous Mecha out of.

The current buzzword in hard sci-fi is Helium-3—believed by many to be the catalyst of choice for those nifty fusion reactors that should be perfected any time now. Theoretically, it's a safe large-scale energy source with few environmental side effects. But more importantly, though there's extremely little of it on Earth, there's plenty of it on the Moon.

The term originally comes from aerospace engineering, where it was used to refer to materials that would be perfect for a particular design if not for the inconvenient fact that they were unavailable—either because they were too expensive, or did not actually exist.

See Also: Minovsky Physics when the Unobtainium has well-thought-out properties that are strictly adhered to, and Green Rocks, which can be thought of as pure unobtainium ore.

Examples of Unobtainium include:

Retrieved from "https://allthetropes.org/w/index.php?title=Unobtainium&oldid=1801419"
Categories:
Cookies help us deliver our services. By using our services, you agree to our use of cookies.