All Trolls Are Different 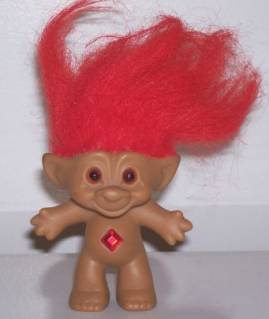 The terror of mythic Scandinavia.

Elves have Pointy Ears and live for a very long time out in the magical forest. Dwarves live underground, dig up jewels, and are short and like to grow long beards. Merpeople live underwater, have sea-creature features, and sing. And Trolls...

Err? Well, they're always big, ugly, brutal, and stupid, right? Except when they're small, Ugly Cute and friendly.

Should they be giants with scaly green skin that rapidly heal from any injury except fire or acid? Or something that's literally made of rock and gets smarter when it's in the cold? Or perhaps something that guards bridges from errant goats?

All right, let's admit it. Trolls are diverse. It's not even a matter of everyone wanting them to be different; there are so many clashing ideas of trolls in mythology itself that it's hard to decide what they are. So, really, you can't blame modern creators for putting their own spin on trolls. If there is any consistency, it is that the less cute the troll, the meaner the troll, but even that tends to be subverted.

Quite a few depictions of Trolls have them as being vulnerable to fire. Some fictional interpretations give them ridiculously fast regenerative powers, such that they can heal themselves even as you're cutting them down making them frighteningly invincible. In these interpretations, fire is the only way to prevent their injuries from healing and thus the only way to defeat them. Others have them harmed or petrified by sunlight.

Many of the differences stem from language barriers. When translating a myth from another culture, it was common habit for a previously unknown creature to be stamped as a troll. The names Ogre, Giant, and Troll were also interchangeable for many storytellers, resulting in further confusion.

Even within Scandinavian folklore trolls are extremely diverse, and range from magical mischievous goblins to huge dumb giants who roamed the forest and could sniff out a Christian man's blood. Part of this comes from the isolated nature of Scandinavian communities; localized versions of monsters destroying crops and eating your porridge appeared. The word troll in Norse languages, similar to trolleri for magic, is basically a blanket term for any creature that's strange, unusual, poorly understood, seemingly supernatural or vaguely inhuman.

Has nothing to do with trolling, except when it does.

See Our Orcs Are Different, Our Goblins Are Wickeder, Our Giants Are Bigger, and Our Ogres Are Hungrier.

Examples of All Trolls Are Different include:

Retrieved from "https://allthetropes.org/w/index.php?title=All_Trolls_Are_Different&oldid=1966293"
Categories:
Cookies help us deliver our services. By using our services, you agree to our use of cookies.