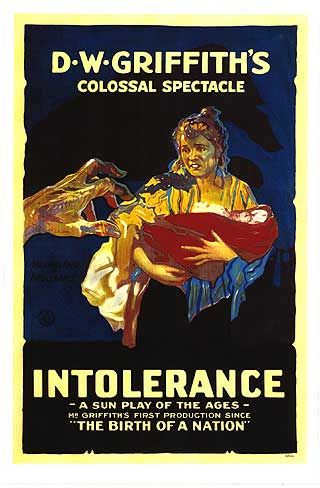 Intolerance is a film directed by D.W. Griffith with four stories about mankind's intolerance. Each story takes place in a separate time and place in world history. Rather than being told sequentially, the film constantly cuts from one story to another, establishing moral and psychological links between all of them, effectively telling all four stories in parallel.

It was made in direct response to D.W. Griffith's previous film, The Birth of a Nation. Reportedly, Griffith had no idea that The Birth of a Nation was based off a racist retelling of history until it was pointed out to him, and was horrified at what he had presented and how he was now perceived. However, the film itself is not specifically about race relations.

The four stories are:

The original concept was to give equal time to all four stories, but that would have made for an even longer film that the massive product Griffith eventually released. The St. Bartholomew's Day story was cut shorter and the Jesus story was cut even more than that; the finished film gives considerably more attention to the modern-day "Mother and the Law" story and the Babylon story than the other two.

This film is in the public domain and can be viewed in its entirety on YouTube. Warning, almost 3 hours long, and wobbly. A proper digital remaster is long overdue.

Some of the architecture from the film's Hall of Babylon scene has been recreated at the Hollywood & Highland Center in Los Angeles.

According to Lillian Gish's memoir, Griffith reedited the film several times after its release. Originally, the four stories were approximately the same length. However, he soon realized that the Babylon sequence was the audience favorite. He lengthened that sequence while shortening the St. Bartholomew's Day Massacre, which he thought received the least favorable reaction. (In fact, in 1919 he released a full-length version of the Babylon sequence – retitled The Fall of Babylon – complete with new scenes shot to give the Mountain Girl's story a happy ending.) It's unlikely that the original version of Intolerance will ever be restored since most of the footage edited out of the film after its initial release has been lost.

Intolerance was one of the first 25 movies listed on the National Film Registry.

Tropes used in Intolerance include:
Retrieved from "https://allthetropes.org/w/index.php?title=Intolerance&oldid=1745603"
Categories: