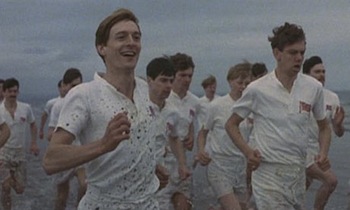 Chariots of Fire is based on the two Real Life athletes Harold Abrahams and Eric Liddell, who competed for Britain in the 1924 Olympics. The film does have a large dash of Hollywood History, but was still impressive enough to win the Academy Award for Best Picture.

The film is largely notable today for its score, by Vangelis, who was famous for making incredible music with synthesizers, such as in the film score for Blade Runner

Tropes used in Chariots of Fire include:
Retrieved from "https://allthetropes.org/w/index.php?title=Chariots_of_Fire&oldid=1829231"
Categories: