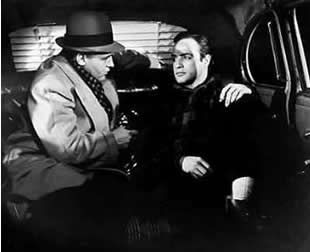 A 1954 film directed by Elia Kazan and starring Marlon Brando in his first Academy Award winning-role, On the Waterfront was also the Oscar winner for Best Picture.

In the film, Brando plays Terry Malloy, a former prizefighter now employed as a dockworker for the corrupt Union-boss, Mr. Friendly. One day, Malloy inadvertently participates in the murder of a dockworker that had planned to expose Mr. Friendly's illegal activities. As he comforts the dead man's sister, Edie, and meets a kindly priest, Terry is urged to help expose Friendly's crimes before someone else dies. How long can Terry go on before he finally has to act against the corrupt men who own the docks?