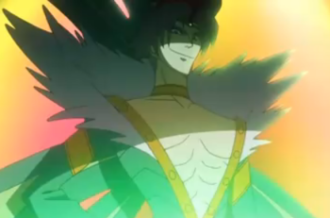 "The Flaming Homo Bad Guy only has one goal in life, to be gayer and more evil than anybody else. If he sees a guy in a salmon-colored shirt and white khakis clubbing a baby seal, the Flaming Homo Bad Guy will put on a pink tutu, gather up some baby seals, kittens and puppies and rent a wood chipper."
—Cracked.com, "Hollywood's 6 Favorite Offensive Stereotypes"

The Sissy Villain, as his name would suggest, is a man whose heart is as twisted as his wrist is limp.

Frequently, The Hero pitted against the Sissy Villain is an old-fashioned Manly Man (any feminine traits he has are merely there to underscore his masculinity) and making the villain "unmasculine" is intended to emphasize this. After all, there's nothing manlier than beating up a sissy. However, effeminate does not necessarily mean weak.

The Sissy Villain is probably the second most common portrayal of effeminate gay men (besides "one-dimensional joke character"), but is not necessarily synonymous with Depraved Homosexual. While Sissy Villains are frequently gay or bisexual, most of them are merely sexually ambiguous or seemingly asexual, and some of them are straight. The Sissy Villain isn't intended to creep out the audience just because of the implication that he might like men (although this usually factors in), but because he acts like a "pansy."

Needless to say, this trope has often been criticized for its Unfortunate Implications. It is also particularly amusing to see this trope used with villains who are also shown as trying to steal the girl from hero, though this might be a reflection of one of the tragic modes of eugenics dramas of Sol III: 'Unsuitable male breeds with desirable female'.

This trope shows up mainly in Western works and those Japanese works aimed at a male audience; if the villain is presented as certain kinds of swishy, female fans are likely to declare him utterly fabulous.

Sissy Villains show up frequently in anime, where they often have white hair. A common subtrope of the Sissy Villain is the Villainous Crossdresser. Compare Agent Peacock, which can be applied to heroes and villains. See also Fashion Victim Villain, Gorgeous George, Depraved Homosexual, Depraved Bisexual, and Psycho Lesbian. May sometimes overlap with misogynistic views in the context of the Effeminate Misogynistic Guy. Contrast with Real Men Wear Pink, and occasionally, Evil Sounds Deep. When his ambiguous (nor not so ambiguous) sexuality is played for laughs, that's Queer People Are Funny. Not to be confused with Non-Action Big Bad, although they can overlap.

Since quite a few women actually find effeminate men attractive, this can also lead to Evil Is Sexy.

No real life examples, please; calling anyone either a Villain or a Sissy is not a compliment; calling somebody both just invites Flame Wars.

Examples of Sissy Villain include:

"Nothing says sinister like little pink bows on your pigtails!" -- The Nostalgia Chick

Is he being sarcastic, or just flaming

Marik: Foolish fools! There are no women in Yu-Gi-Oh! There are only extremely girly men. And I am the most girly of them all!
Pegasus: Keep telling yourself that.