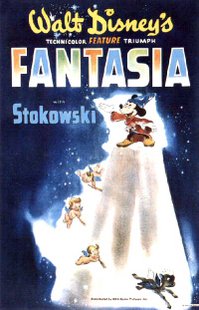 Fantasia is a 1940 animated film from Disney Animated Canon. It's a surreal, yet classic blend of animation and classical music, often considered to have been ahead of its time back in the day. Another way to describe it as is Silly Symphonies: The Movie.

The film consists of animated sequences synchronized to classic pieces of music. They are as follows:

Fantasia was well received during its initial release, and it became a hallowed masterpiece of western animation, eventually resulted in a sequel, Fantasia 2000. Unlike most Disney sequels, this one was actually in accordance with Walt Disney's intent; the original idea was to update the film every year, animating one or two new songs every time and rotating older ones out of the print to make room for the fresh material. In addition, the prestige of being in a Fantasia film meant that Disney had no trouble lining up celebrities to introduce the various sections of film.

The sequences in this one include:

Disney later planned an international-themed follow-up, called Fantasia/2006, and later Fantasia World. After the cancellation of its theatrical release, some of the completed shorts received limited or direct-to-video releases. Disney announced plans to include the feature on the Blu-Ray set of the 1940 and 2000 Fantasia movies, but by the time the discs actually came out, they decided to only include one short.

The sequences prepared for this one include:

Not to be confused with the American Idol winner, or the name of the fantasy world in the film version of The Neverending Story.

Compare later Disney films Make Mine Music and Melody Time which both feature music-based shorts, even using a few of the unused ideas from Fantasia. Contrast Allegro Non Troppo, the 1977 Bruno Bozzetto answer to Fantasia, which hovers comfortably somewhere between Affectionate Parody and Take That (and is just as breathtakingly beautiful).

Tropes used in Fantasia include:

It also includes the hollowed out volcano post-eruption and could possibly allude to the incredibly fast regrowth of the forest decimated by the Mount St. Helens eruption (though not as fast as the animation, or course.)

Retrieved from "https://allthetropes.org/w/index.php?title=Fantasia&oldid=1934533"
Categories:
Cookies help us deliver our services. By using our services, you agree to our use of cookies.