Everything About Fiction You Never Wanted to Know.
Jump to navigation Jump to search
/wiki/King Crimsoncreator 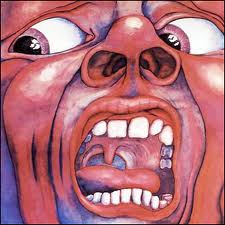 King Crimson is a band that began in 1969 in London, from the first generation of Progressive Rock groups. They've pretty much existed ever since, despite some pretty regular break-ups and reformations (1969-1974, 1981-1984, 1994-present). Also debatably proof that time travel is real.

The only constant member of the band is guitarist and mastermind Robert Fripp, and indeed the band's 1969-1974 period was plagued by unstable lineups. However, things have stabilised somewhat since their 1981 reformation.

Their music is characterised by really impressive instrumental technique, Epic Rocking, pretty extreme dynamic contrasts, lots of Improv, lyrics that usually sound cooler than they read (when they appear), and a large percentage of tunes that seem specifically designed to fuck with your head.

King Crimson provides examples of the following tropes:
Retrieved from "https://allthetropes.org/w/index.php?title=King_Crimson&oldid=1778604"
Categories:
Cookies help us deliver our services. By using our services, you agree to our use of cookies.