Everything About Fiction You Never Wanted to Know.
Jump to navigation Jump to search
/wiki/David Bowiecreator 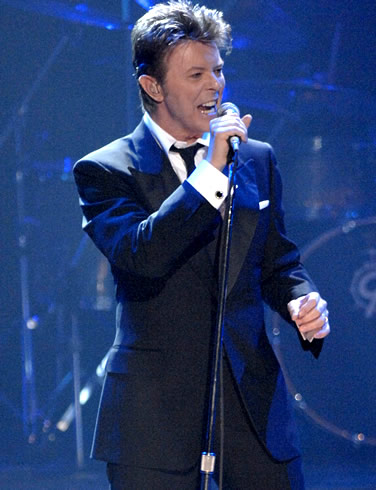 David Bowie (born 1947, died 2016), one of rock music's most influential figures, has gone by many names, many sounds, and many visual styles throughout his career.

Although his recording career begin in 1964—he released an album and numerous singles during the middle years of The Sixties—David Bowie first caught the eye and ear of the public in the autumn of 1969, when his space-age mini-melodrama "Space Oddity" reached the top five of the UK singles chart. After a three-year period of experimentation he re-emerged in 1972 during the glam rock era as the flamboyant, androgynous alter ego Ziggy Stardust, spearheaded by the hit single "Starman" and the album The Rise and Fall of Ziggy Stardust and the Spiders from Mars. The relatively short-lived Ziggy persona (about eighteen months) epitomised a career often marked by musical innovation, reinvention and striking visual presentation.

In 1975, Bowie achieved his first major American crossover success with the number-one single "Fame" and the hit album Young Americans, which the singer identified as "plastic Soul"; it was during this period that he became one of the few white performers invited to play Soul Train. The sound constituted a radical shift in style that initially alienated many of his UK devotees. After this, he had his first major film role with The Man Who Fell to Earth.

Not entirely sure what to do next, he spent about a year continuing his funk-influenced act with his last "character", The Thin White Duke, a bizarre, thin, well-dressed European aristocrat who -- much as Bowie himself did at this point—survived primarily on "red peppers, cocaine, and milk." He then confounded the expectations of both his record label and his American audiences by recording the minimalist album Low—the first of three collaborations with Brian Eno and Tony Visconti over the next two years. Arguably his most experimental works, the so-called "Berlin Trilogy" albums (named for his place of residence during this period as he pulled himself out of addiction) all reached the UK Top Five, though their overall commercial success was uneven.

Bowie had UK number ones with the 1980 single "Ashes to Ashes" and its parent album, Scary Monsters (and Super Creeps). He paired with Queen for the 1981 UK chart-topper "Under Pressure", but consolidated his commercial—and, until then, most profitable—sound in 1983 with the album Let's Dance, which yielded the hit singles "Let's Dance", "China Girl" (a cover of an Iggy Pop song which he co-wrote), and "Modern Love".

1983 was also marked by The Hunger and Merry Christmas, Mr. Lawrence, further establishing his side career as an actor. His best-known role after The Man Who Fell to Earth would be Jareth, the Goblin King in 1986's Labyrinth (which has gotten quite the reputation for gratuitous crotch shots in the process of becoming a Cult Classic). Ranging from supporting roles to cameos, his acting work also includes Twin Peaks: Fire Walk With Me, Absolute Beginners, The Last Temptation of Christ, Zoolander, The Prestige, and even a voiceover role in SpongeBob SquarePants.

Back to music: He stayed with the commercial sound of Let's Dance for two more albums, but dissatisfied with the results, moved on to front the (ahem) short-lived rock band Tin Machine. From there he returned to solo work to increasing critical acclaim as the Turn of the Millennium arrived. After emergency heart surgery in 2004 forced him to cut a tour short, he made fewer and fewer concert, film, etc. appearances. As of The New Tens, he's an apparently-retired Reclusive Artist.

Bowie and his work have been referenced, parodied, and otherwise in a colorful variety of works. He's portrayed as a shapeshifting supervillain in The Venture Brothers, the Doctor Who story "The Waters of Mars" has a Bowie Base One on the Red Planet, the villains of one My Little Pony Friendship Is Magic episode are known as Diamond Dogs, etc. Two of his songs informed, and became the titles of, a very successful BBC series and its follow-up in the new millennium (namely, Life On Mars and Ashes to Ashes). And the 1998 film Velvet Goldmine presents a No Celebrities Were Harmed take on Bowie's glam rock years.

Notable for keeping his political opinions to himself and concentrating on entertainment.[1] He married Somalian supermodel-actress Iman in 1992. Via his first marriage to Angela Barnett in The Seventies, he is also the father of Zowie Bowie, better known these days as Duncan Jones, who made a name for himself as the director of 2009 sci-fi masterpiece Moon and the 2011 techno-thriller Source Code.

The Onion's A.V. Club has an excellent Primer article that runs down his musical career.

In 2016, just two days after his sixty-ninth birthday and three days after the release of his last album, Bowie lost his year and a half long battle with cancer.

Parts of David Bowie's physique, known only as "The Area", have its own cult known as "Areaology" devoted to it.

David Bowie provides examples of the following tropes:
Retrieved from "https://allthetropes.org/w/index.php?title=David_Bowie&oldid=1778629"
Categories:
Cookies help us deliver our services. By using our services, you agree to our use of cookies.