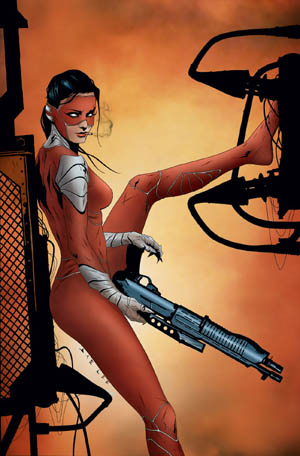 A DC Comics series from 2004 to 2009 created by writer Marc Andreyko artist Jesus Saiz and tying into the Identity Crisis crossover event. Kate Spencer is a Los Angeles Federal Prosecutor by day, but after the supervillain Copperhead gets a lesser sentence and escapes, killing his guards she takes equipment from an evidence locker and blows Copperhead's brains out, leaving a message on the wall with the name "Manhunter."

Kate is the eighth DC character to bear the name Manhunter, but is otherwise unconnected to the previous holders of the title.

After the cancellation of her own book, Kate appeared in Birds of Prey, Streets of Gotham and more recently Justice Society of America.

Not to be confused with the Martian Manhunter.

Tropes used in Manhunter (comics) include:
]
Retrieved from "https://allthetropes.org/w/index.php?title=Manhunter_(comics)&oldid=1846464"
Categories:
Cookies help us deliver our services. By using our services, you agree to our use of cookies.