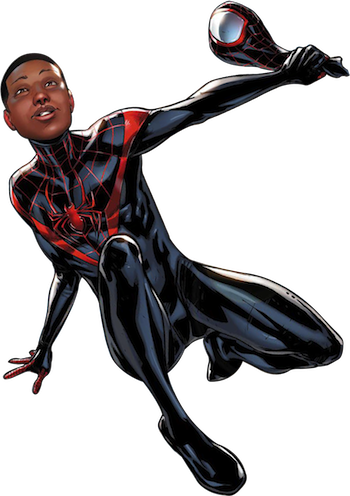 Does whatever a spider can

So, the Big Two comic publishers have a couple of issues. The first: brand new characters not heavily tied to already existing characters and continuity have a hard time becoming popular and long-lasting. The second, the eras when characters could stick (the Golden and Silver Ages) produced heterosexual white males almost exclusively. The solution to both? Take a preexisting character, and pass their superhero identity to a Token Minority character!

Trouble is, the legacy characters often don't stick very well either; in 2009-2010, DC Comics depowered, marginalized, or outright killed almost all of the Legacy Characters established in the Post-Crisis era and replaced them with their Silver Age counterparts. It also doesn't help that sometimes, these new characters don't catch on and fall out of a regular role, occasionally resulting in another trope entirely.

On the other hand, several of these characters have gone on to be popular and enduring heroes in their own right; it's worth noting that the aforementioned DC Comics purge was met with a storm of angry criticism from many fans, and the decision had more to do with a desire to bring back the Silver Age lineup than a rejection of the minority characters. The move was so unpopular that DC partially reversed it by restoring the legacy versions of Blue Beetle, Atom, and Firestorm in their controversial 2011 relaunch.

Examples of Affirmative Action Legacy include:

Retrieved from "https://allthetropes.org/w/index.php?title=Affirmative_Action_Legacy&oldid=1940282"
Categories:
Cookies help us deliver our services. By using our services, you agree to our use of cookies.