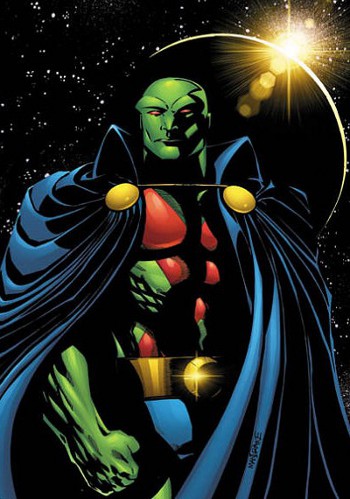 There's nothing little about this Green Man.

Martian Manhunter is one of the DC Universe's odd men out. On the one hand vastly powerful and a member of pretty much every version of the Justice League of America, yet on the other, writers just don't seem to know what to do with him. His past has been Retconned several times, his personality varies by writer, and since he has more powers than Superman, he suffers from occasional mind squicks, frequent bouts of Plot Induced Stupidity and Mind Over Manners to keep him from resolving plots too quickly.

He first appeared in Detective Comics #225 (November, 1955), created by Joe Samachson and Joe Certa. An alien teleported to Earth by a Freak Lab Accident, J'onn J'onzz[1] decided to use his abilities to help protect the innocent who could not protect themselves. All of his incarnations have that much in common (well, the DCAU and Smallville versions came to Earth on their own, but that's a minor detail).

Factors that have varied greatly over the decades include whether he is actually the Last of His Kind, whether J'onn J'onzz is his real name, whether the green humanoid form he normally assumes in public is his true appearance, whether his memories of Mars are real or fake, and whether his Weaksauce Weakness to fire is psychological or physical.

His powers vary tremendously, even within a single incarnation. In his earliest proto-Silver Age appearances, he worked mainly with Psychic Powers (and writers kept coming up with newer and sillier applications as the Age got more Silvery -- like mental ice cream creation and sonic finger-snapping). Since then he's mainly been treated as a Flying Brick with a few extras.

In his solo series from 1998, writer John Ostrander revealed that J'onn largely functioned as the "Superman" of the Southern hemisphere, operating as its most recognizable hero (which makes a lot of sense when you think about it[2]), as well as maintaining numerous assumed identities the world over, including being a regular cab driver for Clark Kent.

To the non-comic-geek public, he is best known for his role on the Justice League and Justice League Unlimited animated series, where he was voiced by Carl Lumbly. He appeared in Batman: The Brave And The Bold as Batman's close friend, and acts as the Only Sane Man in a number of episodes. He has also popped up in The Batman, voiced by Dorian Harewood, on Smallville where he's played live by Phil Morris, and the So Bad It's Good aborted pilot, The Justice League of America, where David Ogden Stiers (Dr. Winchester from M*A*S*H) filled the role. The animated film Justice League: The New Frontier had MM voiced by Miguel Ferrer. He also appears on the animated Young Justice as Miss Martian's (supposed) uncle. He appeared in the DC Extended Universe, played by Harry Lennix.

As part of The DC Comics relaunch, he became one of the central characters of Stormwatch and has lost most of his friendliness, relationship to other DC characters, and love of Oreos.

If you're looking instead for the Veronica Mars/Buffy the Vampire Slayer crossover Fanfic of the same name, go here.

Powers used by the Martian Manhunter are a mixed bag with no cohesion that nonetheless makes him very formidable; the ones common to most incarnations are:

Note that all these are subject to change without notice; the telefilm J'onn could just barely shapeshift and demonstrated no other powers (it was a very low budget show) but had no problem with heat. The Smallville Manhunter can't heal within Earth's atmosphere and remains almost exclusively in human form. On The Batman, he has telekinesis. The JLU version lacked speed, Invisibility, Eye Beams and weakness to fire was only implied. And so forth.

Retrieved from "https://allthetropes.org/w/index.php?title=Martian_Manhunter&oldid=1892168"
Categories:
Cookies help us deliver our services. By using our services, you agree to our use of cookies.