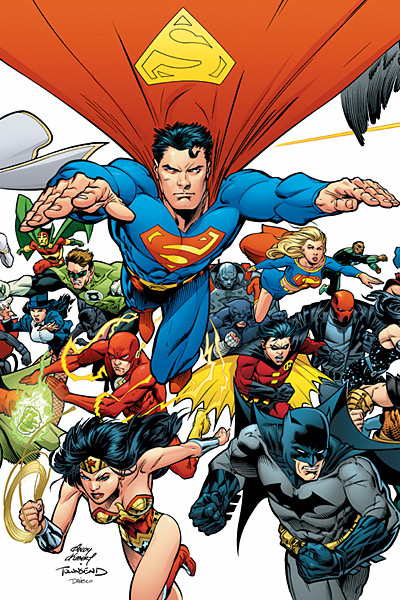 The DC Universe is the Shared Universe belonging to DC Comics, established in 1934 and now the oldest major comic book publishing company. This is mostly used as a vehicle for their extensive Superhero mythos, although the nature of the universe allows for almost unlimited storytelling potential in many different genres.

The DC Universe is primarily responsible for establishing the concept of the super-hero in popular culture, with Batman, Superman and Wonder Woman as some of their oldest and most popular characters. Their introduction of the Justice Society of America during World War II was also the first real super-hero team book, using the cross-over to establish the first shared universe in comics history. Their massive early popularity was stunted by the invention of the Comics Code which nearly killed the industry, and many of the bowdlerised stories from this era are responsible for several negative stereotypes about the medium. There was a revival in the late fifties and early sixties with the creation of newer more imaginative updates of characters like Green Lantern and The Flash, leading to DC's biggest characters forming the Justice League. To explain the difference in continuity, they established a Multiverse with the different versions of the heroes occupying different world. The popularity of this team book also inspired Marvel Comics to publish their own team book Fantastic Four, leading into an era of more maturely written super-hero stories dealing with the development of characters and more serious problems.

One of their most controversial moves was the epic storyline Crisis on Infinite Earths during the eighties, an effort to untangle their years of Continuity Snarl by destroying the Multiverse and establishing one linear continuity for all of the characters to co-exist in. This included revising much of the universe's history and updating the origins of many characters. The Multiverse has been brought back during Infinite Crisis, although the mainstream continuity has only been changed in minor ways reflecting the story-telling needs of the writers. There was a second, much more widespread reboot of the DC Universe in September 2011 with all titles being restarted back to number 1, with these titles referred to as the "New 52".

Their distinguished competition is the Marvel Universe, published by Marvel Comics. The two lines appear similar at first glance, but there are some very subtle differences between the two. While there are many exceptions, the main difference is that the super-hero community tends to have a stricter sense of black-and-white morality at DC. This is written as a mature philosophical stand-point, dealing with the heroic archetype and their place as trusted members of society; in the DCU the general public tend to have greater respect for their heroes and treat them with higher esteem.

The defining characteristics of The DCU

Comics series and characters set in The DCU:

TV series set in (parts of) The DCU:

Superman-based (mostly in Metropolis, but given ol' Kal-El's range all bets are off):

A subset of The DCU is the DC Animated Universe (AKA the "Timmverse" or the "Diniverse"), consisting of Batman the Animated Series and every other series that takes place in the same universe. It has its own Canon, with more than one Crossover between series, and is best known for its distinctive artstyle, based on the works of Paul Dini and Bruce Timm. This universe has ended with the final season of Justice League Unlimited.

Series in the DCAU:

DC and Warner Brothers recently began a new series of animated movies, released straight to DVD, called DC Universe Original Animated Movies. Mostly they focus on individual characters, including some, like Wonder Woman, who have never had their own animated series. All movies with the exception of the Superman/Batman titles (which are loosely related to each other) are standalone stories.

Retrieved from "https://allthetropes.org/w/index.php?title=DC_Universe&oldid=1575063"
Categories:
Cookies help us deliver our services. By using our services, you agree to our use of cookies.