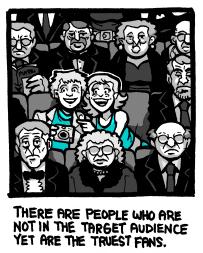 A notable bunch of audience members outside of the intended (i.e., marketed) demographic.

This is very frequent when it comes to Western Animation that manages to overcome the Animation Age Ghetto and feature subtle humor that's often over the heads of youngsters. Then of course, there's the simple fact that despite the increasing presence of adult-oriented animation, there's still a severe lack of cartoons specifically directed towards teenagers. As a result, teens who are still into animation have no choice but to tack onto the viewership of one or the other.

A very noticeable instance of this occurs in the anime fansub community. Digital recorders/encoders, which effectively remove the timeslot and language constraints to a program, make it accessible to anyone, and the series audience is largely drawn only by the perceived quality of the show itself. For this reason, a show packed with girls is enough like "a show packed with girls" that may be enjoyed by the same fan, even if that fan is wildly different than the 'original' one. This likewise holds with male characters, who are often deliberately drawn as pretty boys in order to attract fangirls who were reading similar stories anyway (e.g., Bishonen Jump Syndrome, because Shonen Jump was infamous for it). Sometimes this is taken a step further and you get a Selective Squick-cleansed rough adapation of the premise marketed directly to them.

It is also common for a popular franchise that is marketed towards children to gain an older fanbase if it's been around for a while; many of these older fans enjoyed it when they were young and simply never outgrew it. The companies making such shows may give little nods to the older fans (and sometimes even make new installments that cater exclusively to older fans). Some fans, perhaps because of these nods, seem not to realize that these popular kids' series are still made mainly for kids, and that doesn't change just because the older viewers are not kids anymore. Unfortunately, fans like these may cause negative stereotypes about nerd fanbases.

Can also be due to many demographics simply having wider ranges of interest than they're given credit for.

Series with strong marketing sense usually profit from being at least slightly aware of these fans, if not outright creating Multiple Demographic Appeal. Unfortunately, this creates the danger of an annoying Periphery Demographic being viewed as a Misaimed Fandom, if not outright Fan Dumb.

Also some fans within a show's main demographic, may consider the work in question a guilty pleasure.

This Cracked article gives you a good sample of what you can expect from this trope.

Examples of Periphery Demographic include:

Retrieved from "https://allthetropes.org/w/index.php?title=Periphery_Demographic&oldid=1951284"
Categories:
Cookies help us deliver our services. By using our services, you agree to our use of cookies.