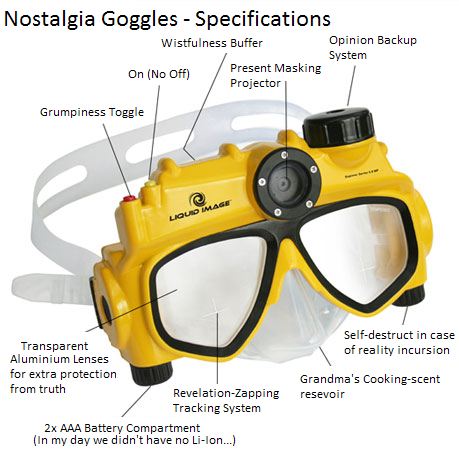 The nostalgia goggles you get today are crap; they were so much better back in my day.

There is a tendency for adults to see newer material in a medium (be it music, film, animation, or comic books) as inferior to the older 'classics' that they knew in their youth.

There are many causes for this. First, people's tastes are generally based on the art they knew as they grew up, and they continue to inform themselves on this basis. Second, tastes refine as one matures; what may have seemed brilliant to a child or teen would seem crude or laughable to most adults, but the memories of how great something from one's youth seemed linger long afterward, making the familiar examples seem better than more or less equivalent modern ones in comparison. Third, change in most art forms comes in waves, rather than developing continuously, and the transition from one wave to another can be jarring and unfamiliar—while the periods between waves tend to be uninspired across the board.

However, it is likely that the most important cause of this nostalgia is a consequence of Sturgeon's Law combined with the passage of time: As new material is released, the vast majority will be of mediocre or worse quality, but over time, a powerful selection pressure causes all but the best material (and in some infamous cases, the worst) to be rapidly forgotten, leaving an increasingly inaccurate impression of the overall quality of the genre over time. This is known as "the nostalgia filter", and can be easily demonstrated by a careful review of the period works that are not remembered today.

The distance of time also compresses the memories of past eras, causing the best work to seem more continuous than it was, whereas "new" is a continually moving frontier: between this memory compression and the selective memories of "the good stuff", the past of the genre is remembered as a time when "it all was good"

One final possible reason: most developers/authors/artists/musicians/etc. create whatever is popular at that day and age. This means that what was popular last year isn't being produced in the same density. If a person's preference is for something that is out of fashion right now, they may have little choice besides 'hang onto the older version' or 'give up on it completely'.

Of course, this is certainly not to imply that newer is automatically better or that the Nostalgia Filter applies to every single case; just because a person prefers an older work to more modern things doesn't mean they only like it because of nostalgia. Sometimes the older work is better, or at least has its own appeal that the present things don't -- even beyond "Charm", which is often thrown around to describe stuff mostly to just mean "It's nostalgic".

You'll notice that this trope sometimes overlaps with the Periphery Hatedom. Almost always, when people complain about how new stuff sucks, they bring up examples of things which were marketed towards the youth of their own generation as examples of "good" or even "classic" works in the genre. Never mind that 20 years ago, when it was being marketed towards them, the adults back then were saying the exact same thing we are today. It's a neverending cycle.

See also Nothing but Hits and Nostalgia Ain't Like It Used to Be. Another reason for this trope is that True Art Is Ancient. Contrast Deader Than Disco.

No real life examples, please; we'd be here all day. Please limit examples to Nostalgia Filters worn in works. In short, pretty much any genre or form is subjected to this in Real Life, so such examples aren't really necessary.

Examples of Nostalgia Filter include:

This page was so much better back in the day. But today...it just sucks.

Retrieved from "https://allthetropes.org/w/index.php?title=Nostalgia_Filter&oldid=1843242"
Categories:
Cookies help us deliver our services. By using our services, you agree to our use of cookies.