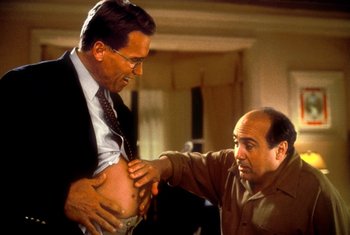 Find this concept weird? Danny DeVito does too.

A male character gets pregnant through Functional Magic, weird science, gender-bending, Bizarre Alien Biology, body swapping, actually being a seahorse, outright ignorance of human biology or just plain bad writing. Usually played for laughs, but it can be done seriously or even tragically, especially when it's an Alien Impregnation from a Face Full of Alien Wingwong.

The "Mister Seashorse" (or "M Preg") story is especially common in fanfic, and usually considered one of the scourges of fan writing, second only to Mary Sue, because it is done ridiculously often and almost always badly. It is often given no more explanation than The Power of Love overcoming fundamental biology. But then, do you really want to know which lower orifice the baby came out of? (Fanfic criticism circles describe such offspring as "ass-babies", which is not wise to use around men who aren't cis or straight for a few reasons).

Sometimes this trope is justified when the action takes place in the future, the protagonists are non-humans or aliens (especially if they are hermaphrodites), or if it's somehow in canon. Regardless of how it comes about, though, fanfic with this often turns into Kid Fic.

In case you missed that class in biology, the trope name comes from the fact that male seahorses have an egg pouch. In it, they receive and fertilize the eggs of their mates, and carry them to term.

This is theoretically possible in real life. A scientist was able to implant an embryo in the abdominal wall of a male baboon, and others report that it is indeed possible to get a man pregnant if the embryo is planted at the proper spot, but only if the man is pumped full of pregnancy hormones. The embryo creates its own placenta, it turns out.[1] Unfortunately, the abdominal wall is not designed to detach from the placenta, resulting in massive bloody injury. Route of exit is also problematic, as neither anus nor urethra were designed to stretch at all (not to mention being our means of getting rid of body waste, with bad consequences should that waste get backed up), and a c-section would either be premature or need to wait for the baby to try to get out on its own first. Needless to say, human male volunteers, not wanting to risk their lives on it, have not been forthcoming.

May involve Bizarre Alien Biology and Bizarre Sexual Dimorphism. If the other parent is also male, you've got Homosexual Reproduction. See also Nightmare Fuel and Body Horror, men. Ladies, we respect you greatly for doing this for the species; please don't laugh too hard at how much this can freak us out. See also Chest Burster and Ass Shove for the potential non-C-section routes of exit.

Probably the most understandable reason to say "But I Can't Be Pregnant". If the character actually has a uterus, that's Your Tomcat Is Pregnant.

Examples of Mister Seahorse include:

Fan Works based on Anime and Manga

Fan Works based on Comic Books

Fan Works based on Films

Fan Works based on Literature

Fan Works based on Music

Fan Works based on Video Games

Fan Works based on Web Comics

Fan Works based on Web Originals

Fan Works based on Western Animation

Retrieved from "https://allthetropes.org/w/index.php?title=Mister_Seahorse&oldid=1944002"
Categories:
Cookies help us deliver our services. By using our services, you agree to our use of cookies.