Everything About Fiction You Never Wanted to Know.
Jump to navigation Jump to search
/wiki/Orson Wellescreator 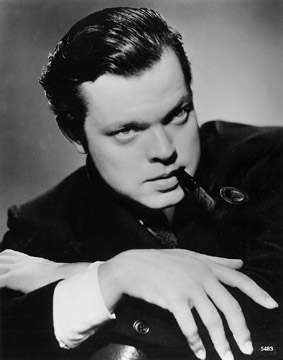 Everybody denies I am a genius, but nobody ever called me one.

Orson Welles started his career on the stage because of his confidence and chutzpah. From there, he came to do the Mercury Radio Theater with a regular troupe. The highlight of his career there was his 1938 broadcast of The War of the Worlds, which was so convincing that people actually believed aliens had landed in New Jersey. (This story, albeit true, is often highly exaggerated. There were no riots.)

From there, he made his first movie for RKO Pictures, Citizen Kane. He got complete artistic control; he directed it, produced it, wrote at least some of it, and played the lead. Citizen Kane was a groundbreaking film, generally considered one of, if not the best of all time, so much so that it's created Hype Aversion. It's very enjoyable despite that.

Unfortunately, the film tanked at the box office, as Charles Foster Kane was thought to be Inspired By William Randolph Hearst, who was still alive and better at maintaining his power than Kane was. When a large percentage of the papers are against your film, it needs heavy promotion from the studio to succeed. Since Hearst was still alive, it didn't get it. It was Vindicated by History about two decades too late.

Welles went on to try to film The Magnificent Ambersons; he intended it to be an epic. This had a considerably higher budget than Citizen Kane, and great ambition. Unfortunately, he took too long, his Auteur License was revoked and Executive Meddling came into play; about half the footage was cut out of the film and probably Lost Forever. The remainder of the film suggests what sort of greatness the complete work would've had, but didn't have the probable full measure.

Welles made several films after those two, including F for Fake, Touch of Evil, and The Trial. Although nothing he did was as well known as Citizen Kane, many of his movies were excellent and still remain worth seeing.

He played Harry Lime, in The Third Man, and he wrote the most memorable lines of the character.

After burning almost every bridge in Hollywood, he was reduced to doing mostly voiceover work... most infamously for a frozen peas commercial. His tagline in commericals for the Paul Masson winery, "We will sell no wine... before its time," became a meme in The Seventies. A bit of a Grammar Nazi.

The great showman prodigy, praised as a natural genius in his youth, died five days after finishing recording the voice of Unicron for the 1986 Transformers: The Movie.[1]

He was rather overweight in his later years, leading to many jokes relating to the fact that his final role would be that of a planet. What's funny is that his last role really was a planet.

Maurice LaMarche can do a spot-on impression of him. Has also been played by actors Vincent D'Onofrio in Ed Wood (with the voice dubbed over by LaMarche) and Christian McKay in the Richard Linklater film Me and Orson Welles.

Filmography:
Orson Welles provides examples of the following tropes:
Retrieved from "https://allthetropes.org/w/index.php?title=Orson_Welles&oldid=1956521"
Categories:
Cookies help us deliver our services. By using our services, you agree to our use of cookies.