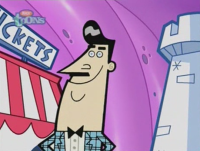 Meet Walt Kidney -- absolutely no relation to that other Walt guy.

A No Celebrities Were Harmed version of Walt Disney; expect him to be the animator of a world-famous cartoon character and/or the founder of Souvenir Land. Also expect an exaggerated interest in planned communities and/or creating a utopia, possibly with sinister undertones. Oh, and Human Popsicle or Brain In a Jar jokes, many of them.

Examples of Mr. Alt Disney include:

"Hey, look Wanda! It's Walt Kidney! And his guide, Tinklebell!"