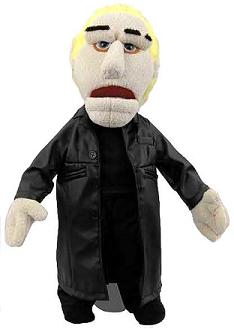 "You're a bloody puppet!"

"I was once a badass vampire. But love, and a pesky curse, defanged me. Now I'm just a big fluffy puppy with bad teeth."

—Spike speaking of Angel in an inadvertent prophecy of what was to become of him later on down the road, Angel

The process by which a Badass becomes less of a badass.

A belief persists among many writers that if the audience takes a liking to a real Badass who fears nothing, has infinite confidence and even carries off defeat with panache, it must mean that what they most want to see is that character reveal a vulnerable side and all manner of inner demons.

It is either that belief or the natural result of Character Development, where extra dimensions are added to an existing character to flesh them out and keep them fresh. Either way, the character starts out badass, and becomes less so over time.

Most often this happens through Ensemble Darkhorse tendencies, they appear so often and are so popular that any attempt to give them greater depths results in them losing what made them so effective in the first place.

Contrast with Took a Level in Badass. Compare with Menace Decay, Motive Decay, Villain Decay, and The Worf Effect. Compare and contrast Bait the Dog and Moral Event Horizon, where a Badass character loses their cool as a result of dog kicking.

Also note that this trope applies when a badass decays within a single continuity. If an absolute badass in your favorite book is portrayed as somewhat less awesome in The Film of the Book, that's not this trope.

A reminder from your friendly neighborhood watch: Tropes Are Not Bad. In fact many of the characters on this page Took a Level in Badass as a result of their Badass Decay, such as Vegeta and Bowser.

Examples of Badass Decay include:

GANGSTALICIOUS: You know who my favorite rapper was when I was your age? Ice Cube.
RILEY: The dude that makes family movies? He was a gangsta rapper?
GANGSTALICIOUS: He was so gangsta. I used to have dreams that Ice Cube came to my house and killed my whole family.
The Boondocks

"Writing a story centered around your main antagonist is sort of difficult, because you risk "devillainifying" them. Yes, I just made that word up. What I mean though, is that once an audience has read all about a character's life, with all of their personal struggles and trials and tribulations and such, it's more difficult to see the character as the Big Bad. My challenge here was to tell the story of Xykon's life without making Xykon even slightly sympathetic. I mean, he's wholly and unapologetically Evil, but more to the point, he's kind of a dick."