Brain In a Jar 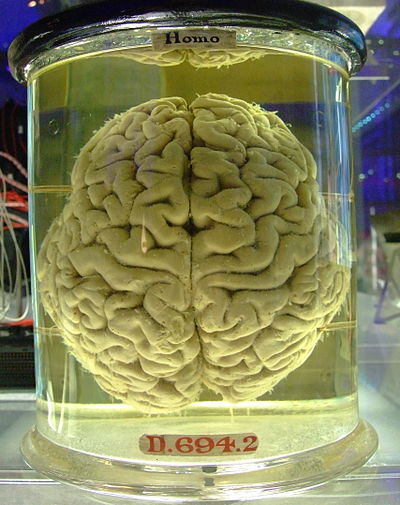 The Wonders of Science can keep a human brain alive in a plastic fishbowl with a few wires and doo-dads running into it. Sometimes this is benevolent, but usually it's nefarious. Occasionally, an underachiever Mad Scientist may need to keep the whole head alive, not just the brain. Sometimes the spinal cord and/or eyeballs are also there.

Sometimes it is presented as the end result of natural evolutionary processes. One day, we may find the rest of our bodies superfluous and exist simply as disembodied brains.

Occasionally with this trope, a virtual reality is put into the brain so that it thinks it's a regular person with a body, making it a sort of Lotus Eater Machine. See The Other Wiki's "brain in a vat" article for further discussion of this idea.

It seems that in about one in five examples of this trope the brain will always be Hitler's. Walt Disney (or, more likely a No Celebrities Were Harmed Expy of him) is also popular. Expect them to be given mobility by being encased in robotic life support units... with Death Rays! For Science!!

Compare with People Jars and Man in the Machine; pretty much the same thing, but with complete bodies instead of just a brain. Compare also Soul Jar, in which the more immaterial essence of one's self, is preserved. Compare Heart Drive, for a robotic (and sometimes biological) equivalent. Compare with Oracular Head when the head may be preserved by other means and used for answering questions of a divinatory nature. Compare to Losing Your Head when the whole head is preserved and capable of independent movement. This may or may not lead to And I Must Scream.

Examples of Brain In a Jar include:

Retrieved from "https://allthetropes.org/w/index.php?title=Brain_In_a_Jar&oldid=1895830"
Categories:
Cookies help us deliver our services. By using our services, you agree to our use of cookies.