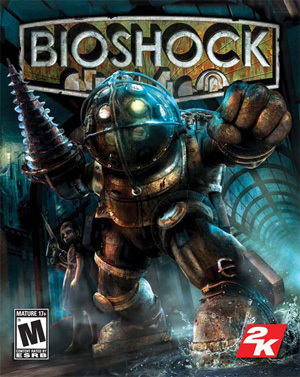 In Rapture, Mr Bubbles drills YOU.

BioShock is a 2007 first person shooter with Survival Horror elements produced by Irrational Games, then known as "2K Boston" and "2K Australia". It is a Spiritual Successor to the System Shock games produced by the same company, and the first game in the BioShock series.

It is the year 1960. Beneath the surface of the Atlantic Ocean, there lies an underwater city, Rapture, founded in 1946 by industrialist Andrew Ryan. Built by individuals tired of the oppressive hands of church and state, it is populated by the greatest minds of the world. It was to be a Utopia, but the discovery of ADAM, a powerful but addictive mutagen that can give the user incredible powers, coupled with Ryan's own draconian policies and basic refusal to place any restrictions on ADAM's sale and use, turned it into a nightmare. Now Rapture is infested with homicidal mutants, fighting each other for the scraps of civilization left standing after a disastrous civil war.

BioShock features a retro-futuristic hellhole for players to escape. They take the role of Jack, a seemingly nondescript man who stumbles across Rapture after the commercial flight he's on crashes near the surface entrance to the undersea city.

Jack soon finds his only way out is to fight through hordes of "splicers", the deranged and hideously mutated citizens of Rapture, using anything he can get his hands on to survive. His arsenal includes both traditional and not-so-traditional firearms (a revolver, a shotgun, etc.) and "Plasmids", special gene-modifying injections that give the user incredible powers such as telekinesis and pyrokinesis. Jack can also hijack Rapture's own security cameras, robotic drones and turrets and use them against the splicers.

Aside from its complex story and jaw-dropping setting, part of the draw of the game is the ability to use the environment, weapons, and plasmids in interesting ways: one can light a splicer on fire, then electrocute the poor soul after he or she leaps into the nearest body of water. Or the player can use the grenade launcher to stick proximity mines onto an explosive barrel, then throw it at a group of enemies with Telekinesis for a huge explosive attack.

A Prequel novel for BioShock and BioShock 2 was released in 2011, called BioShock: Rapture. It elaborates on events hinted at in the games.

Tropes used in BioShock include:
Retrieved from "https://allthetropes.org/w/index.php?title=BioShock&oldid=1911442"
Categories:
Cookies help us deliver our services. By using our services, you agree to our use of cookies.