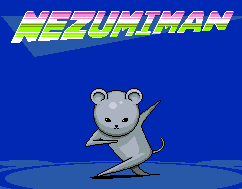 Nezumi Man is a Homage/Parody to the classic NES Mega Man games, starring a rat who can run, slide, jump and shoot like the Blue Bomber himself. He has to stop the plans of Big Bad Dr. Gyoniku and his henchmen, along with seven other rat and ratlike characters. And a kangaroo whose name means "rabbit".

This game is surprising for its lower difficulty compared to other Mega-clones, especially once you get their patterns down (or have their weaknesses). Despite this, it's still fun to play, mostly because of the completely original concept.

Tropes used in Nezumi Man include:
Retrieved from "https://allthetropes.org/w/index.php?title=Nezumi_Man&oldid=1762173"
Categories: