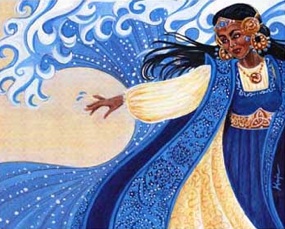 You attack with the stuff that makes up 60% of your body mass, covers 70% of the Earth's surface, and falls from the sky on an regular basis: water. Just plain old reliable water. It may not scream "explosive devastation" like fire and lightning does (until you see the water-mage drop a tsunami on an entire battalion of enemy mooks), but you can't trump water's versatility and availability. Flood 'em, drown 'em, frost 'em, steam 'em, wash 'em, whatever. And no, we don't use that water to heal someone, that's for the White Mage. Use it to kill someone!

Many philosophers, like Lao Tzu above, wax poetic far beyond Sesquipedalian Loquaciousness about how nothing in the world is weaker and more malleable than water, and yet water wears away the hard and strong. The mountain stands tall and proud, but the sea will eventually grind it to sand. Water always, always, always wins in the end.

A water controller's biggest weakness is that they usually must be in the vicinity of water to be effective. Not a problem in a modern city if they can affect underground plumbing, but if it's not raining and they're nowhere near a source of water, they might be SOL. It's very rarely addressed that they could just sap the water directly from a person's body, killing or weakening them instantly, but this could be an issue of dramatic license, since that would result in some very short and uninteresting fight scenes.

There are also beings like Marvel Comics' Hydro-Man and Darkwing Duck's Liquidator, who are sentient masses of water. Beating them can be tough as bullets and fists can simply punch through them to no effect while energy weapons' beams can be scattered though the substance. Furthermore, they usually change their shape at will, pass through anything that is not watertight and hit with concentrated blasts of their own mass. However, there are ways of defeating them: you can freeze them, you can evaporate them, you can make them lose cohesion by hitting them with electricity to induce electrolysis, or you can contaminate their bodies with a solidifying material, like cement or bake mix, to immobilize them.

In most cases, this power beats Playing with Fire. A Sub-Trope of sorts is An Ice Person; both can be very dangerous indeed, if the two are combined. See Kill It with Water for cases where this is Super Effective. Soft Water may still be in effect—you just drown 'em. Often, Water Is Blue.

If you came here looking for Splash Damage tropes, you would do well to go to Splash Damage Abuse, and to Shockwave Stomp for situations where the stomp isn't purely decorative).

May overlap with Elemental Shapeshifter.

A Sub-Trope of Elemental Powers.

Examples of Making a Splash include:

Retrieved from "https://allthetropes.org/w/index.php?title=Making_a_Splash&oldid=1965513"
Categories:
Cookies help us deliver our services. By using our services, you agree to our use of cookies.