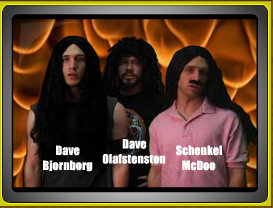 The Band Members of Taranchula.

In a group of characters with Theme Naming, sometimes one just doesn't fit the pattern.

To the viewer, this is about as subtle as placing a big, blinking neon sign saying "HEY, LOOK! THIS GUY'S IMPORTANT!" above their head even before the character has a chance to do anything, and whether or not they really are important is a matter of debate. For some reason, this character tends to be named Bob, due to the inherent hilarity of the name "Bob". He may also have another Plain Name.

Sometimes identifies The Runt At the End. Can also apply to a lapse in Idiosyncratic Episode Naming.

Compare Aerith and Bob. Subtrope of The Last of These Is Not Like the Others.

Examples of Odd Name Out include:

Retrieved from "https://allthetropes.org/w/index.php?title=Odd_Name_Out&oldid=1929192"
Categories:
Cookies help us deliver our services. By using our services, you agree to our use of cookies.