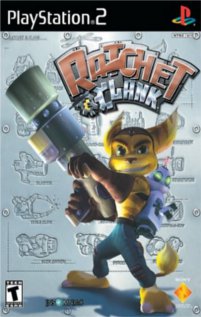 The first game in the Ratchet and Clank series, it was a modest hit for the PlayStation 2.

The game is about how the titular duo meet and then team up to stop Chairman Drek and the Blarg from destroying planets across the galaxy in order to build themselves a new homeworld. In exchange for a chance to see the galaxy, Ratchet helps Clank look for the great hero, Captain Qwark.

Ratchet: A Public Display of Affection?
Qwark: No, a Personal Delivery Assistant.

Clank: There must be a better way to find a home for your people.
Drek: You think that's what this is about? Who do you think polluted the last world? I did. This is about one thing and one thing only: cash, and lots of it. See, I've been paid for every square inch of my new world. Once the new inhabitants move in, I'll begin polluting this world as well, and the whole thing starts all over again. Ah... brilliant.

Drek: "Imbeciles. After all the trouble you've gone to, you're about to die right where you started. *sniff* It's so...poetic."