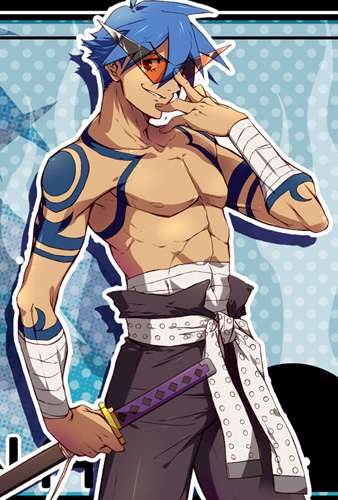 If your favorite show happens to include an attractive male in its main cast, the chances are high that he's going to wind up losing his shirt [1] sooner or later. It may be gratuitous, and it will almost certainly bring the Squee, but it will also be temporary. Eventually, Mr. Fanservice will replace his shirt, and you'll have to resort to rewinds and freeze-frames if you haven't gotten your fill.

Unless, of course, the object of your Perverse Sexual Lust is this guy.

The Walking Shirtless Scene isn't the dude who gets the most frequent or gratuitous Shirtless Scenes. In fact, he's the guy who has no Shirtless Scenes, because that would imply that he ever wears a shirt to begin with. The Walking Shirtless Scene is, instead, the dude whose default attire involves parading around half-naked. His Limited Wardrobe is so limited, that it doesn't even include a shirt - or if it does, he seems physically incapable of buttoning it. And even if he does have an Unlimited Wardrobe, every outfit would have the singularly shared trait of lacking anything that covers the upper torso.

As you might guess, fangirls love him. And sometimes guys, as well.

For obvious reasons, at least in many Western cultures, this is a male-exclusive form of Stripperiffic-ness. The closest you can hope from someone without a Y chromosome (unless they're an Funny Animal or Civilized Animal) is some Absolute Cleavage, Godiva Hair or a Walking Swimsuit Scene.

Examples of Walking Shirtless Scene include:

"Aw, this vest is just weighing me down!"