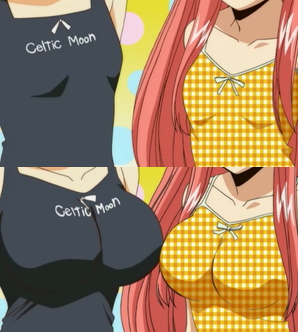 A character suddenly finds their breasts enlarged to often immense levels, via Applied Phlebotinum, magic, science, or otherwise. Mostly happens to flat chested characters suffering from A-Cup Angst, though women on the other side of the spectrum may have it happen as well. When played for the Fetish Fuel side, the actual growth tends to be as important as the final size of the breasts. It is also played for comedy, but this still ends up providing Fan Service. An Overnight Age-Up for women usually guarantees this will happen.

An alternative is Fake Boobs.

Examples of Breast Expansion include:

Retrieved from "https://allthetropes.org/w/index.php?title=Breast_Expansion&oldid=1947709"
Categories:
Cookies help us deliver our services. By using our services, you agree to our use of cookies.