Everything About Fiction You Never Wanted to Know.
(Redirected from Ratchet and Clank)
Jump to navigation Jump to search 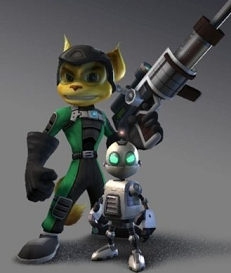 The adventures of Funny Animal alien Ratchet and his Robot Buddy Clank as they save the galaxy through Platforming, Puzzle-solving, and Prodigious Firepower. The series is developed by Insomniac Games after they were finished with the first Spyro the Dragon games. This series maintains the whimsy and humor of those games, with a kitchen sink of sci-fi elements, and a bunch of Impossibly Cool Weapons.

The series so far consists of:

Insomniac and DC comics have a comic book mini-series, with the first issue out in September 2010. It is set after the events of A Crack in Time. After the defeat of Dr. Nefarious at Great Clock, Qwark is promoted to Galactic President and Ratchet and Clank return home for some rest and relaxation. However, something strange starts to happen, entire planets are beginning to disappear, and the Duo discover this to be the handiwork of Artemis Zogg, the planet thief. Word of God also confirms that Lawrence saved Dr. Nefarious from the crashing space station at the last second, and have retreated to a currently unknown location. Another recent development is revealed in the final issue, where Tachyon is revealed to be stuck in another dimension after Zogg is stuck there as well.

Alongside the announcement of Resistance 3, Insomniac has revealed Ratchet & Clank: All 4 One, a new game that features Co-op play as its main draw, with it being easy to join and leave games at any time. Characters you can play as are Ratchet, Clank, (now Galactic President) Qwark and Dr. Nefarious after they are all captured in a People Zoo, forcing an Enemy Mine situation.

A crossover was released where Ratchet and Clank team up with Sly Cooper and Jak and Daxter.

After the release of All 4 One, there was announced two new Ratchet & Clank games, a HD remake of the first three R&C games, and a Playstation Store title named Ratchet & Clank: Full Frontal Assault (Q-Force in other countries) which is stated to take a more traditional route and play more like the originals. Their future's looking bright after all.

Tropes used in Ratchet & Clank include:
Retrieved from "https://allthetropes.org/w/index.php?title=Ratchet_%26_Clank&oldid=1855526"
Categories:
Cookies help us deliver our services. By using our services, you agree to our use of cookies.