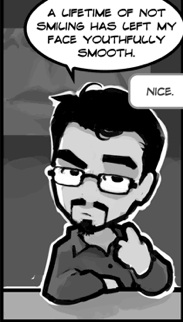 Matt of 3 Panel Soul knows how to stay young.

He can be in the middle of a gunfight, his best friend's bachelor party, or a helpless witness to the death of everyone and everything he holds dear... and he'll show all the emotional reaction of a victim of a Botox overdose. Though the silent warrior has roots stretching back to The Drifter in Westerns and farther back, The Stoic differentiates himself in that he's not quiet out of contemplation or introversion, but because he's so tough that he doesn't need to emote (or so the writer would like you to think).

The Stoic is not necessarily The Quiet One. While The Stoic may be low key and quiet, more often than not he's just as talkative as anyone else. Another difference is that while The Quiet One does feel and display emotion (albeit less vocally and regularly, but makes up for it with deeper pathos), The Stoic is so utterly devoid of any semblance of human emotion that he borders on being a true Tin Man or The Spock. Whether he has emotion or not varies, but he will invariably refuse to ever show it.

They can be Heroes, antagonists or Anti-Heroes. In a Five-Man Band he might be The Lancer or The Big Guy. His quiet demeanor tends towards the brusque or outright rudeness, though there are a few polite Stoics. Mostly writers (ab)use it to give the impression of a lot going on inside and cultivate an air of mystery and to confuse other characters with cryptic one-liners.

Masculine pronouns are used throughout this trope because quiet women tend to be the creepy Emotionless Girl. Notice, however, that although Emotionless Girls can seem to be easily confused with Stoic Girls, it's actually very easy to tell the difference: an Emotionless Girl usually seems to give a creepy, otherworldly feel, while a Stoic Girl radiates a massive aura of badassness. In either case, female stoics often wind up being woobies.

The Stoic does sometimes display emotion when under extreme stress or in other highly emotional situations, but their usual repertoire consists of mild boredom, detached interest, Dull Surprise or dignified disdain. He may be a Deadpan Snarker, or simply have No Sense of Humor. If he ever shows true emotion, it's likely to be explosive in its intensity and reveal that he's Not So Stoic. The tougher sort of stoic may hide it so thoroughly that only his having Bad Dreams show any of it. As opposed to Frozen Face, where the emotions appear absent because they do not alter his expression, even in the highly emotional situations. A few stoics might calmly pipe up that they have feelings and opinions too when they're taken for granted, they just aren't effusive about it.

The Stoics in ancient Greece were philosophers who believed that self-control and detachment from emotion and passion would give them greater insight in their quest for truth. Stoics would later be criticized for denying themselves and others any kind of earthly pleasure or silliness in life.

Protagonists of this type include:

Minor characters and antagonists of this type include:

Other tropes associated with stoics include:

Contrast/Compare with Loveable Rogue, Become a Real Boy, The McCoy and Gentle Giant. Often on the winning end of Emotions vs. Stoicism.

Examples of The Stoic include:

Retrieved from "https://allthetropes.org/w/index.php?title=The_Stoic&oldid=1871418"
Categories:
Cookies help us deliver our services. By using our services, you agree to our use of cookies.