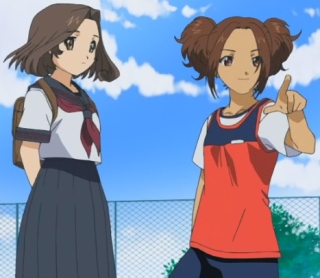 When the main characters in a show are both female, or if there are only Two Girls to a Team, it almost always leads to a case of this trope. The "Girly Girl" will highly care about her appearance, pursue "girly" interests, and is often (though not always) The Chick. The Tomboy, who is often The Big Guy, will be an aggressive Action Girl who's into sports, mechanics, or the like. She couldn't care less about her hair or makeup, but is often an Unkempt Beauty anyway.

The two ladies will have some sort of relationship with each other, whether they're best friends, on the same team, or even explicit lovers. If they're together for reasons outside their control (ie, part of a team), they might initially dislike or confuse each other with their ways, until the inevitable Girls' Night Out Episode forces them to put aside their differences and forge a common bond (note: if there are more than two girls in the group, these two must have some kind of relationship over the others).

Subject to Unfortunate Implications if one is portrayed as being "better" than the other and can also lead to Fan Dumb or Hate Dumb. The girly girl is portrayed as shallow or "less of a strong woman", or the tomboy is portrayed as a cold man hater or even ambiguously lesbian, for taking a less traditional gender role. Works that involve Values Dissonance are particularly vulnerable to this.

Compare/contrast Bifauxnen and Ladette (the equivalent of this trope, only without said girly girl involved) and Light Feminine and Dark Feminine (the other equivalent, without the tomboy). Contrast Silk Hiding Steel, Spirited Young Lady, and often Badass Princess, where a female character looks and acts like a girly girl but has the spirit of a tomboy.

Sensitive Guy and Manly Man is the Spear Counterpart, especially if they're the only guys in the group.

Important Note: While this is usually a straightforward trope, examples can still get subjective in regards to whether or not one of the girls is tomboyish enough, the other is girly enough, or whether they're different enough. Keep a few points in mind when editing;

Examples of Tomboy and Girly Girl include:

Note: This trope can find itself incarnated in musical theater with the Soprano playing the girly girl and the Mezzo/Alto (or, face it, any female with a significantly lower vocal range) playing the tomboyish one, or the girly girl role being the role that requires a lot of singing, while the tomboy role requires more dancing.

Retrieved from "https://allthetropes.org/w/index.php?title=Tomboy_and_Girly_Girl&oldid=1945964"
Categories:
Cookies help us deliver our services. By using our services, you agree to our use of cookies.