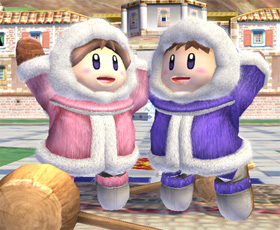 Nana and Popo are happy with their fashion tastes.

In fiction, and sometimes in Real Life, we tend to differentiate between "girly colors" and boyish ones. It is clearer with babies, when we are prone to see girls dressed in pink and boys in light blue.

What's funny is that this is actually a recent development. In fact, in some cultures, it used to be the opposite: pink was associated with baby boys, because it's derived from red, which is a good masculine color (in some countries, it still is). Blue used to be feminine (and True-Blue Femininity often still applies), as it was the color of the Virgin Mary.

Note that lots of female characters have had a pink motif that they wear with pride and sheer badassery. Male characters as well, because Real Men Wear Pink. But sometimes, pink is considered too childish and disrespectful, especially to an adult woman, so red may be substituted.

If there are Two Girls to a Team and one is represented by pink, the other girl will usually be represented by purple. A purple girl can be anything from a Goth to a Tomboy to a Proper Lady, while the pink girl is usually The Chick and/or a Genki Girl. While purple on a girl is considered more "mature" than pink, purple boys are often portrayed as weak, infantile, Camp Gay, or oafish; on the other hand, it's a common color for pimps' attire.

Can crop up in many Boys Love and Girls Love stories; the active partner (Seme in BL, Onee-Sama in GL) is unlikely to wear "girly" colors such as pink, but the passive partner (Uke, neko) frequently does, and (especially in GL but sometimes in BL) may even have pink hair.

A Sub-Trope of Pink Means Feminine and Color Coded for Your Convenience.

Compare Tertiary Sexual Characteristics, Red Oni, Blue Oni, Color-Coded for Your Convenience, Pink Is for Sissies, Princesses Prefer Pink. Not to be confused with Pink Boy Blue Girl, a redirect to Masculine Girl, Feminine Boy, which describes a pairing of a masculine girl and a feminine boy.

Retrieved from "https://allthetropes.org/w/index.php?title=Pink_Girl,_Blue_Boy&oldid=1949025"
Categories:
Cookies help us deliver our services. By using our services, you agree to our use of cookies.