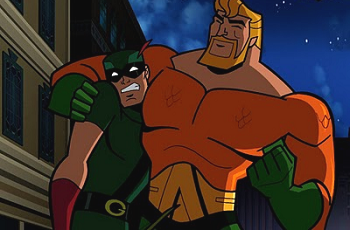 This trope is OUTRAGEOUS, old chum!

A common character in RPGs and action shows, the Boisterous Bruiser is a fun guy to be around. He will often be part of an ensemble and will most likely be The Big Guy in a Five-Man Band, although he tends to be a bit more boisterous than the usual archetype who plays that role. If he's not The Idiot From Osaka, he will at least tend to act bumpkin-ish and crude. If he's as dumb as he is big, he will at least have had enough life experience to dispense sage and world-wise advice to the Kid Hero whenever he needs it.

He (and this character is almost always a "he", though in exceptional cases can be a "she") will usually not be part of a formal army (as he hates authority, unless he's serving under the Kid Hero). Instead, he'll often be a mercenary-for-hire or the leader of a band of thieves. Or the leader of a band of pirates. Or the leader of a rag-tag rebel army. Or all four at once. If he's an Anime character, he will inevitably have a Kansai Regional Accent, and will often be Hot-Blooded. He's like a really obnoxious but likable Supporting Leader. He's almost always a Large Ham.

He may start out as an antagonist or as some kind of obstacle to our heroes, but he will usually be charmed into joining the heroes' side after witnessing their courage and determination (or he may just decide to throw in with them on a whim or if they both have a mutual enemy).

If he happens to be some sort of formal ruler or king, he will act in an extremely informal way. He will also tend to be loud, firebrash, filled with bravado, and (if it's a live-action production) played by Brian Blessed.

He will spend most of his off-time at the tavern, partying hard, knocking back tankards of ale or cups of sake, and getting into fights. The Straight Man, The Smart Guy and The Chick will find him annoying, but everyone else will think he's a total hoot. His tales of his prowess can be a little exaggerated, but those who assume he is all talk will have a surprise coming. He tends to laugh often, and is rather fond of giving rookies a hard time or playfully patting weaker characters on the back with enough force to send them flying across the room. (The Naive Newcomer may not realize his strength because he does not looks like a bodybuilder; Stout Strength is common.) He might show affection through bone-crushing Bear Hugs.

He will rub a lot of people the wrong way, but he's such a good fighter that most of his comrades will tolerate his foibles. He will usually pull Tank Duty if he's part of an RPG combat party and in large formal battles, he will often split off from the main party and start mowing down enemies by the hundreds (an action which may or may not anger his superiors). But there's really no telling him what to do. He plays fast and free by his own rules and most people are okay with him (although they'd be even more okay with him if he drank less, stopped getting into fights, didn't leave his dirty laundry everywhere, and stopped hurling insults at people).

If his melancholies are as gigantic as his mirths, see also Emotional Bruiser. If someone has the size and personality without the fighting skills, see Big Fun. Compare the Friendly Sniper, who is similar but with Improbable Aiming Skills instead of physical strength. Also compare his less macho counterpart, the Keet.

Examples of Boisterous Bruiser include:

Another one is where he simply laughs and claps with his feet.

Retrieved from "https://allthetropes.org/w/index.php?title=Boisterous_Bruiser&oldid=1899511"
Categories:
Cookies help us deliver our services. By using our services, you agree to our use of cookies.