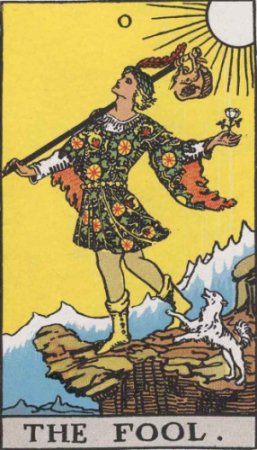 "Going on a journey. I've got my cell if you need me."

Not the kind of fool that Mr. T pities.

The Fool has no idea what he's doing, he has a dim idea at best who his enemies are or whether he's in danger, and only has his cheerful disposition to protect him.

That and the blessing of Lady Luck herself. The Fool's strength comes from supernatural fortune bordering on Karma. Since The Fool is such a good person, nothing bad happens to them. The Big Bad may send hundreds of assassins, but each time The Fool will bend over at just the right time, or accidentally activate some Rube Goldberg-esque chain of events that leads to the villain's downfall. Occasionally their good luck will be siphoned from someone else around them so that they suffer bad luck. The Fool might even turn out to be The Chosen One, but he'd be the last one to suspect it.

The Fool was often the Audience Surrogate of medieval plays, representing the Every Man or Karmic Trickster, but typically more clever than smart. In the annual Feast of Fools, he was King For A Day.

See also The Ditz, The Klutz, Too Dumb to Fool, Obfuscating Stupidity, Cloudcuckoolander, Idiot Hero, Invincible Incompetent, and Dojikko. For the court fool, see The Jester. See Idiot Houdini for the more aggressive variant of this. When mistaken for someone important, he's the Seemingly-Profound Fool.

For the Christopher Moore novel about the character from King Lear, see Fool.

Examples of The Fool include:

Retrieved from "https://allthetropes.org/w/index.php?title=The_Fool&oldid=1870048"
Categories:
Cookies help us deliver our services. By using our services, you agree to our use of cookies.