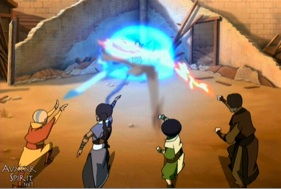 In the past, it was thought that all of matter could be classified into easily viewable "elements" that one can observe with the naked eye. Thus, all of the world was made up of natural forces such as "earth, air, fire, water" et al. The discovery of the atom mostly disproved that, but the idea was so deeply rooted in mankind's mind, that it's still used in nearly every supernatural fictional setting (note that the classical elements actually correspond to a different scientific concept: the phases of matter, provided you count plasma as a fourth phase & not just as a subset of gas. Alternately, fire corresponds to energy, particularly the heat energy that moves matter from one state to another).

The most common use is to give characters some superpower over an aspect of nature—like a character who can conjure or control fire or water, given the right conditions. This usually goes hand in hand with Personality Powers—you're not likely to find a calm and collected guy who can shoot fire, for instance. These "elements" are probably the source of the association of colors with personality traits. A character with elemental power in animation will often have the fitting eye color. It also makes for easy Super-Hero Speciation.

May involve the capability to summon Elementals, the living embodiment of the elements themselves.

Just what the "classical elements" are varies from culture to culture. In Greek (and by extension most European), Hindu, and Buddhist mythology, it's usually Fire, Air, Water, and Earth—with Aether (which can be "souls", "heart", "spirits", or Pure Energy) occasionally mixed in. In classical Chinese mythology, it's typically Fire, Water, Earth, Wood (which includes control over plants as well as the wind), and Metal. The classical Japanese elements are Earth, Water, Fire, Wind, and Void. In some alchemical texts, there are salt, sulphur, mercury, and quintessence, with salt representing the physical, sulphur representing the spirit of life, mercury representing volatility or fluidity and the "passive principle", quintessence was supposed to be the constituent matter of the heavenly bodies, and also sometimes was included with the more common 4 elements. (Indeed, quintessence quite literally means "the fifth element".)

Usually, there will be an effort to make all powers equally important—the elemental powers used in such settings usually employ some form of Elemental Rock-Paper-Scissors, in order to avoid that any one power is clearly more powerful than the others. If some are more important/intrinsically more potent, then the Inverse Law of Complexity to Power may come into play or What Kind of Lame Power Is Heart, Anyway? may result.

Depending on your mileage, you might also have any natural force counted as an element—Darkness (evil black Death energy), Light (glowing holy life energy), regular Light (as in lasers and holograms), Ice, Electricity, Magnetism, Time, Space, Moon, Sun, Stars, Pizza, Gravity, Void (which is usually like a cross between Space, Dark, and Aether), Acid, Sky (Wind with storm and weather added), and Sound as alternative elements.

A lot of cultural baggage has become attached to the elements over the ages, making some of them "bad" and assigning personality traits to them and their practitioners much like a Four-Temperament Ensemble. Fiction exploring elemental powers tends to use these as tropes and character traits:

Some shows that absolutely need a Five-Man Band will come up with a fifth element in addition to the classical western ones, and find a way to make it a team attack that uses All Your Colors Combined. Anime usually employs Light or Lightning, but Western Animation prefers to make something up like Energy or Spirit or possibly heart.

Video Games and RPG's will often add more to the list. Common additions include:

Any setting with magic in it will inevitably have elemental spells.

Finally, it's worth noting that possessing specific elemental powers can make a character vulnerable against a specific element. Fire-elemental beings, for example, don't take too well to Water-elemental attacks. Similarly, Elemental Powers (especially the core four/five) are very competitive if not stronger than abstract elements because of the Inverse Law of Complexity to Power.

Those with these powers may also have the ability of Elemental Absorption. Fire, Ice, Lightning and Elemental Shapeshifter are subtropes.

Elemental Baggage is when a character requires some (usually not much) element laying around in order to work with.

Examples of Elemental Powers include:

Retrieved from "https://allthetropes.org/w/index.php?title=Elemental_Powers&oldid=1812318"
Categories:
Cookies help us deliver our services. By using our services, you agree to our use of cookies.