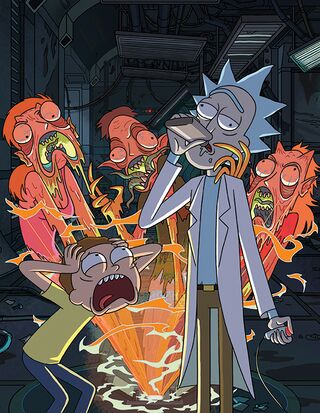 "Don't think about it, Morty."

Rick and Morty is an [adult swim] original that premiered in December 2013. Created by Justin Roiland and Dan Harmon, the series is based off of "The Real Animated Adventures of Doc and Mharti", a short on Channel 101 parodying Back to the Future.

Rick Sanchez, an alcoholic Mad Scientist, constantly pulls his grandson Morty into crazy sci-fi trips and wild scientific experiments. Morty's parents keep the old man around half-begrudgingly, as long as Morty stays in school. Besides, they have their own problems to solve.

Tropes used in Rick and Morty include:

Captain: Sorry for the inconvenience folks, we should resume sinking shortly. In the meantime, please stay on the ship and enjoy a complementary plate of James Camer-onion rings."
Jerry: Great. Not only is the ship not sinking, now the fourth wall has been broken." (see Awesome)

[World is toxified]
Vicar: God is a lie, we made him up for money!
[World returns to normal; vicar ceases licking the nipple of a male parishioner]
Vicar: God is not a lie...

Morty: Dad, you just got handed an ex machina: you're taking it.

Morty: Everything is crooked! Reality is poison! I wanna go back! I hate this!

Rick: Guys, if I could interrupt: we're way ahead with the reveal here.
Beth: Yeah, just take us to King Tommy.

Rick: Man, that guy is the "Redgrin Grumble" to pretending he knows what's going on.
[Summer and Morty laugh]
Rick: You like that "Redgrin Grumble" reference? Well guess what? I made him up. You really are your father's children. Think for yourselves. Don't be sheep.

King Flippynips: I can see you are confused: Plutonimo Bay is a military prison, a sort of play on words...

Snuffles: Where are my testicles, Summer?