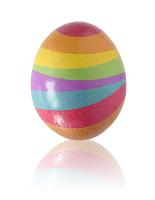 You found an Easter egg! However, most of them aren't this easy to find.

Y The little bits of stuff programmers left behind in the game. They're secrets, intended to tickle the fancy of those who discover them. Programs far too numerous to mention have included Easter eggs—everything from Microsoft Office to Grand Theft Auto: San Andreas.

Sadly, Microsoft has disallowed Easter eggs entirely as part of its Trustworthy Computing Initiative, under the simple rationale that a user should be able to trust that the computer he's using is reliable and reasonably error-free.

Originally, Easter eggs were inserted by programmers for companies whose policy forbid them from receiving individual credit for their work. The earliest Easter eggs were mostly credits pages, possibly to allow the programmers themselves to prove authorship to friends. For security reasons (and concerns about malicious programmers inserting undocumented and destructive code), most companies don't allow Easter eggs to appear in their software anymore, but as individual programmers now receive full credit for their work, it's a moot point. Congratulations! You found an easter egg on this page!

Easter eggs aren't just found in games anymore: the term is also used for a variety of hidden content, such as unadvertised DVD Bonus Content.

An article on why Easter eggs exist (focusing on Magic: The Gathering, but applicable to all games) is available here.

Examples of Easter Egg include: