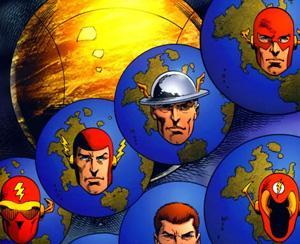 The many incarnations of The Flash

Sometimes a writer creates a universe almost exactly the same as ours, but with slight differences. Some settings refer to not just one other dimension, but to a whole set of other dimensions and universes. A system of distinct worlds exists, often interconnected in a way that allows characters to travel to and from them. It might be as a tourist who just goes to look and tries not to change anything, or as a participant who goes in and interacts with the people in the other universe.

Basically, the travelers have cross-universe travel powers. While it is possible they don't have a choice in their destination, sometimes they do. Most often the means of traveling are special gates, either naturally occurring or by technological or by other magical Phlebotinum.

In some occasions it's the way for a creator to tie several different works via Canon Welding, or to create Crossover.

This provides all sorts of interesting ideas for things you can do, for good or bad. If it involves trans-universe Sex Tourism, you have "Your Universe or Mine?" (or Screw Yourself sometimes). However, beware Evil Twin, and similar beings.

Not the same thing as Alternate Continuity, but it makes a handy way to link them if the writers are so inclined. See also Bizarro Universe, Another Dimension and Alternate Universe. Compare Rubber Band History.

For works set in the same universe, see The Verse.

Examples of The Multiverse include:

Retrieved from "https://allthetropes.org/w/index.php?title=The_Multiverse&oldid=1871213"
Categories:
Cookies help us deliver our services. By using our services, you agree to our use of cookies.