Back to the Future (film) 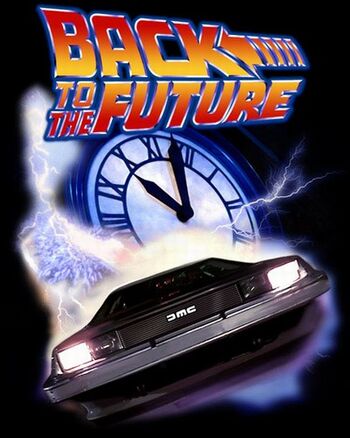 An extraordinarily successful 1980s trilogy of Time Travel Movies starring Michael J. Fox and Christopher Lloyd (with an animated Spin-Off series) which has received several homages. They combined Fish Out of Water comedy with high-stakes drama, making deft use of threatened Temporal Paradox.

In Back to the Future, Marty McFly, a teenager from 1985, accidentally sends himself to 1955 in the time machine Doc Brown built out of a DeLorean. To return home, he needs 1.21 gigawatts of power. Conveniently, a bolt of Lightning Can Do Anything has at least that much power. After initial confusion, the 1955 Doc Brown agrees to help Marty, but they soon discover another complication. Marty has inadvertently stopped his parents from marrying. Now, he has just one week to put history back on track before he and his siblings are erased from existence. He manages it, and in the process invents rock 'n' roll and skateboarding.

In Back to the Future Part II, Doc Brown takes Marty to 2015, a glittering wonderland of flying cars and 100% accurate weather forecasting (possibly via weather control), where Marty impersonates his son to keep him out of trouble. While Marty and the Doc are busy, an elderly Biff Tannen discovers the DeLorean, and uses it to go back to 1955 and give his youthful self a sports almanac with results of major games up to the year 2000. When Marty and Doc Brown return to 1985, they find it transformed into a Dystopia, ruled by a Corrupt Corporate Executive -- Biff Tannen, who grew rich with the aid of the almanac. Now Marty has to return to the same 1955 school dance where he saved his parents' marriage, and Set Right What Once Went Wrong, without being seen by his past self or his parents. At the end, Doc is sent back to 1885 when a bolt of lightning, from the storm that sent Marty home in the first film, hits the DeLorean and accidentally catapults it back in time, stranding Marty in 1955... until he receives a letter by Western Union, from Doc Brown, explaining his situation after the DeLorean disappeared.

In Back to the Future Part III, Marty and the 1955 Doc exhume the DeLorean, mothballed by the 1885 Doc Brown in a closed mine. To their horror, Marty discovers 1885's Doc Brown's tombstone, learning that he was shot by Buford "Mad Dog" Tannen, Biff's ancestor. Originally told to go to his proper time and let him be, Marty instead goes back to 1885 to rescue his friend, but the fuel line is damaged in the trip. Since the DeLorean can't time travel unless it's accelerated to 88mph, both Marty and the Doc are now trapped in 1885 (high-octane gasoline being hard to come by in those days). They only have a few days to find a way to go back to the future, before Doc Brown's appointment with death - but things get complicated when Doc Brown accidentally saves and almost immediately falls in love with school teacher Clara Clayton who was supposed to have fallen into the ravine, going against his stance on not changing history, and Marty finds himself facing a showdown with Tannen.

All three films share many running gags; similar scenes occurring in each of the time periods. These films solidified the career of Robert Zemeckis, who has gone on to make other classic films like Who Framed Roger Rabbit?, Forrest Gump, Contact and the CG films The Polar Express, Beowulf and A Christmas Carol.

An Animated Adaptation, Back to The Future The Animated Series, followed, in which Marty and Doc, along with Doc's now-wife Clara and their kids Jules and Verne, met identical Tannens and McFlys in many other time periods. Universal Studios also hosted a motion simulator ride for many years, where the guests play Doc's volunteers testing out his eight-seat DeLorean, who have to track down another time machine stolen by 1955 Biff. It has since been replaced by The Simpsons Ride, which features a cameo from Doc Brown as an act of courtesy. A cinematic rerelease happened in 2010 to celebrate the 25th anniversary, along with several spinoff products.

In June 2010, Universal and Telltale Games announced plans to develop an episodic Back to The Future Point and Click Game; the fandom rejoiced at the news that Bob Gale and Christopher Lloyd would be involved. The first episode, which begins a new chapter in the Back to the Future series, was released on PC and Mac in December 2010 to solid reviews, and subsequent episodes have been equally well received. Its plot revolves around working with a teenaged Emmett Brown to save Doc from Prohibition-era Hill Valley and how Marty's efforts accidentally create a new timeline.

A card game has also been produced by Looney Labs; essentially a slightly-simplified version of their Chrononauts time-travel card game, the players are alternate-timeline descendants of various characters from the movies, who need to change time to make 'their' universes the real one, before stopping Doc from inventing time travel in the first place and thus preventing anyone changing history again. Yes, you need to use time travel to stop time travel from being discovered. Roll with it. Adding to the confusion is that Verne Brown, who exists because of time travel, is a playable character.

In 2020, a musical based on the first movie opened at the Manchester Opera House.

The original movie, Back to the Future, was added to the National Film Registry in 2007.

The Back to the Future films provide examples of:

Retrieved from "https://allthetropes.org/w/index.php?title=Back_to_the_Future_(film)&oldid=1912122"
Categories:
Cookies help us deliver our services. By using our services, you agree to our use of cookies.