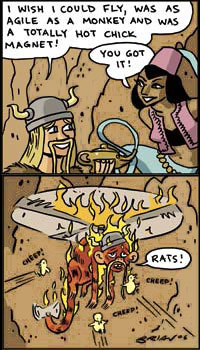 You have to Be Careful What You Wish For, because you are dang sure going to get it.

More often than not, a wish-granting entity (Genie in a Bottle, vengeance demon, holodeck, leprechaun, and so on) has some sort of contractual clause stating that they have to give you exactly what you ask for. Ask for a ton of money, and it will appear. Directly above you, weighing exactly one ton. Ask for X-ray vision, and your eyes will start shooting harmful radiation. What makes this worse is how characters in this situation are now ten times as likely to make a Rhetorical Request Blunder and blurt out a "wish" without meaning to, while the Literal Genie is around. It's almost a mystical effect, as people who have never uttered "I wish" prior otherwise will do so.

In various forms, Literal Genie wishes are very old; specific examples (e.g., immortality without eternal youth, as in the case of Eos and Tithonos) go back to Greek Mythology, while the actual genie trope was known in Arabia by the 10th century. It's also Older Than They Think; the original genie myths were that of the Djinn, the Islamic equivalent of demons or fallen angels, that fit this trope perfectly.

A more modern variation is when the wisher asks for something using slang, colloquialisms, or Ambiguous Syntax, and the Genie, having not been outside for a least a century, grants it literally because that's the only way they can understand the wish. So you can only blame yourself when the genie gives you a wood-drilling bird that's a foot tall.

While the genie claims that they're being literal, or even Just Following Orders, in practice it tends to come off as if they're simply always choosing whichever interpretation of your words is the most disruptive, the most likely to teach the character An Aesop, or at the very least the least wanted. If this goes beyond the point of plausible interpretation, they become a Jackass Genie.

You get around this by wording your request as carefully and explicitly as possible. Of course, there's remarkably little Plot conflict when things can go this well, so don't expect very many characters to actually be this Genre Savvy.

Not to be confused with Exact Words. A more mundane version is Literal-Minded. A highly specific, villainous version is Unhand Them, Villain!. Compare Zeroth Law Rebellion and Blunt Metaphors Trauma. Super-Trope to Gone Horribly Right. If a genie goes out of their way to fulfill the spirit and intention of a person's wishes without any careful wording required, they're a Benevolent Genie. See also Reality Warping Is Not a Toy. Compare Jackass Genie. Generally involves some form of Double Meaning.

Examples of Literal Genie include:

Incidentally, the wards he had prepared to keep any demon from harming him worked this way as well, allowing the demoness who gave him the nickel to... come to an agreement about freeing him.

Ironically, she asks about Freeing the Genie, but due to restrictions, it's not that easy... the only way to free this particular genie is to make a wish that he truly wants to fulfill, but cannot. She asks if "Making a rock so big you can't lift it" would work, and he says, "I have no wish to give myself a hernia." She solves this by having wild sex with him until he's exhausted and then wishing for him to do it all again, IMMEDIATELY. He'd like to, but can't due to exhaustion; thus, she's set him free. "Can you wait five minutes?"

Note that the Devil can't even twist that one by removing all the other people, à la The X-Files genie episode: the supremely selfless nature of the wish bars him from tormenting humans any longer, and knowing he'd inadvertently caused humanity to vanish would torment the wish-maker, who can't be removed under the terms stated.

It should be noted that any wish that was impossible to fulfill would be interpreted in its own way by the GENIE. For example, wishing for something "never to have happened" would be impossible to fulfill, as the GENIE is unable to alter the past. Instead, he might create an illusion for the person as if the wish was actually fulfilled.

This episode also partially subverts the trope, in that after Mulder realizes the genie is a Literal Genie, he became Genre Savvy and decides to plan his next wish very carefully and write it all out beforehand unambiguously. But then he changes his mind and doesn't make the wish at all. It's implied that the genie doesn't have to take the literal interpretation, but does so out of spite for all these selfish people with their stupid wishes. Realising this, Mulder does the only thing he can do and wishes the genie is a normal person again. It's a heartwarming scene at the end. She tells Mulder exactly what her one wish would be, describing being human again, where she would be sitting and what she would be seeing. Mulder "wished" her exact soliloquy, verbatim.

Retrieved from "https://allthetropes.org/w/index.php?title=Literal_Genie&oldid=1902551"
Categories:
Cookies help us deliver our services. By using our services, you agree to our use of cookies.