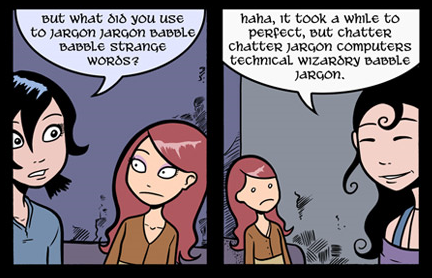 Any impressive- and scientific-sounding, but ultimately nonsensical utterance.

Most common in Science Fiction (usually the softer kind), but military, medical and Police Procedural themed shows can also use it when they want the underlying technology to sound impressive.

Can be used to explain or justify plot developments or simply to add to the genre feel. Comes from the fact that scientific language, despite being meant to allow for easier understanding between scientists, sounds flashy and arcane to the untrained ear.

The difference between jargon and technobabble is that, while jargon may seem incomprehensible to anyone not part of that particular field, it does indeed make sense to anyone familiar with the terms involved, for the simple reason that jargon is meant to allow for clear, unambiguous communication between specialists: if an average computer user says "I can only connect to one network, and even then, I don't have Web or storage," a trained engineer would report this as "User can associate their NIC with only one SSID, and does not seems to be receiving an IP address from the DHCP server." This part also applies to a good degree to non-science fields, where people may not know, for example, what a "1/4 flexible elbow" is, but if you're a plumber or A/C technician, you'd get it right away. Also, notice that technobabble is sometimes Truth in Television, as dishonest technicians sometimes resort to vague, senseless "technical" jargon to make up "serious problems" in the inner workings of a machine and offer to "fix" them for a high price. There is also an element of Reality Is Unrealistic in the concept of the trope: it is only to be expected, if you really think about it, that like all language scientific jargon will evolve over the course of a few centuries, with new words being coined and existing words changing their meaning. As a result, 24th century scientific lingo would naturally sound like complete nonsense to someone in the present in much the same way that modern day scientific lingo would no doubt sound to an inventor of the 1700's. The reverse is also true, if earlier science fictions are any guide.

Examples of Techno Babble include:

And Sulu gets confused when Captain Pike doesn't use technobabble:

Retrieved from "https://allthetropes.org/w/index.php?title=Techno_Babble&oldid=1949334"
Categories:
Cookies help us deliver our services. By using our services, you agree to our use of cookies.