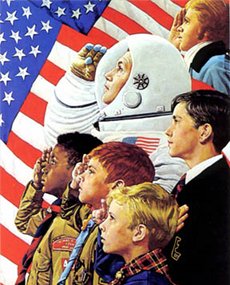 When viewed from the outside, or sometimes even from the inside, the United States of America comes in different flavors.

A country full of proud patriots who reside in a nearly Utopian society—a land of progress, wealth, and luck, where people are able to leave the past behind to make new lives for themselves. In short, this is the flavor that embodies the American Dream. Sometimes based on American media during The Fifties, which portrayed the United States of America as a homey, tradition-sticking, almost saccharine place built on nuclear families, family values, love, and old-fashioned simple mindsets. 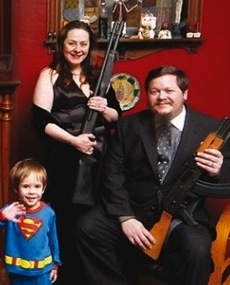 A wretched country full of ignorant assholes who got lucky and like to hide behind their inflated military budget. Americans come into your country either as tourists or invaders, thinking that they own the place and that they rightfully deserve everything. Not only are they less intelligent and less cultured than you, but they also have the gall to look down and patronize you, while proudly waving around the little flags which they carry around everywhere. They're either fat (with a diet solely consisting of fast food and TV dinners), Moral Guardians, trigger-happy cowboys from the Deep South, or shameless anorexic rich bitches from Hollywood California. Oh, and they suck at geography. Always.

Aspiring to complexity and objectiveness, some present the United States less simplistically. Others series just decide to split the difference, treating America as the Boisterous Bruiser of nations—rude, crude, clueless, obnoxious, and vaguely psychotic, but still good-natured beneath it all. A famous Winston Churchill quote sums up this portrayal: "You can always count on Americans to do the right thing--after they've tried everything else."

This Trope is about outsiders looking at the US, so some information here might be heavily stereotyped and culturally offensive to actual Americans. If you happen to see a work that portrays the United States or Americans as a whole as Flavor #2, but it's an American production, that's a case of Cultural Cringe; likewise, an American indulging in Flavor #1 is merely a case of Creator Provincialism. If the work in question doesn't delve into judgment but refers to the US culture and history by both structuralist and functionalist examples then you're probably reading an in-depth history book.

Examples of Eagle Land include:

Retrieved from "https://allthetropes.org/w/index.php?title=Eagle_Land&oldid=1938894"
Categories:
Cookies help us deliver our services. By using our services, you agree to our use of cookies.