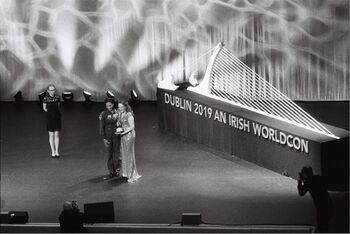 Mary Robinette Kowal receives the Best Novel award for The Calculating Stars at the 2019 Hugos.

The Hugo Awards have been in existence since 1953 and are among the most prominent awards given out for works of Science Fiction and Fantasy (the other most known one being the Nebula Award). The name comes from Hugo Gernsback, the magazine editor who founded Amazing Stories magazine back in 1926 and was influential in bringing the sci-fi genre to popularity.

Contenders for a Hugo are nominated and voted on by the World Science Fiction Society, whose paid membership is open to the general public. The current award categories include Best written works (novel, novella, novelette, short story), long and short form "Dramatic Presentation" (which includes "film, television, radio, live theater, computer games or music"), anthology and magazine editors, professional artist, Best Graphic Story (added in 2009) and categories for Fan Art, fanzines and fan writing (including Fanfic but also nonfiction essays and books about other works).

The Japanese equivalent to the Hugo Award is the Seiun Award.

Works with a Hugo nomination or win with pages on this wiki include:

Literature (Best Novel except as noted)

People - Authors (John W. Campbell Award for Best New Author (which is not a Hugo), unless noted)

These were given for years in which a Worldcon was held but the Hugo Awards were not presented:

Retrieved from "https://allthetropes.org/w/index.php?title=Hugo_Award&oldid=1822040"
Categories:
Cookies help us deliver our services. By using our services, you agree to our use of cookies.