The Adventures of Priscilla, Queen of the Desert 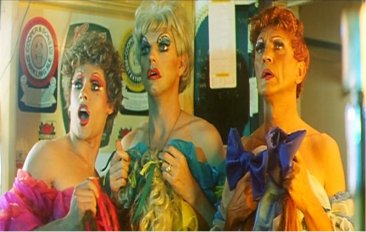 Yeah, that about sums it up.

In the wake of Bernadette's husband's death, Tick agrees to do a drag gig for his estranged wife in Alice Springs, bringing Bernadette and Adam along with him. Along the way they crack stereotypically cutting jokes, reveal secrets about themselves, drink themselves stupid, party with a camp of Aborigines in the desert, meet an Asian woman with interesting talents and pick up her repairman husband Bob for the ride, experience intolerance and danger from violent locals, and, of course, practice their drag show.

Once the group get to Alice Springs, Adam and Bernadette are shocked to find that Tick also has a young son Benji, around whom Tick tries to act like the upstanding masculine dad. Benji turns out to know exactly what his dad does for a living and the fact that he's bi, and the two end up genuinely connecting. Benji comes back to Sydney with Anthony and Adam, while Bernadette stays behind in Alice Springs with Bob.

This movie, with its rather... niche premise, unexpectedly became an international success upon its release in 1994. It earned $11,220,670 in the United States market alone, where it was the 109th most successful film of its year. The film won an Oscar for Best Costume Design. Terence Stamp won Seattle International Film Festival Award for Best Actor, also being nominated for several other acting awards. It was also a critical hit, and remains highly appreciated. Rotten Tomatoes rates it 93% fresh. It's still regarded as a comedy classic -- even if you've never seen it, you've heard about it. Naturally, it's been adapted into a stage show as well.

Tropes used in The Adventures of Priscilla, Queen of the Desert include:
Retrieved from "https://allthetropes.org/w/index.php?title=The_Adventures_of_Priscilla,_Queen_of_the_Desert&oldid=1601428"
Categories: